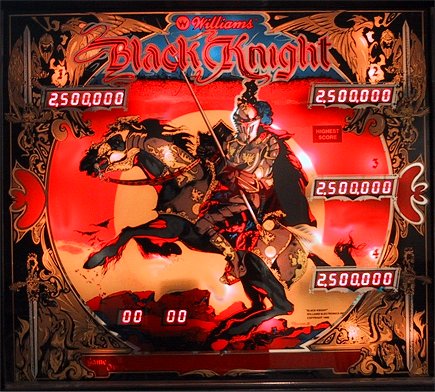 Released back in 1980, Black Knight is one of my favorite pinball games. Easily recognizable by the Knight’s blaring voice, the iconic marquee, and the unique features the game implemented. Despite the game’s age, it still holds up against more modern pinball machines and remains incredibly fun to this day.

Not being super big into pinball, I didn’t recognize what Black Knight did for the pinball scene when it released. If you play the machine you’ll notice a sort of save feature for your balls: if they are about to fall down the side and out of play, they can get pulled back in to the play field thanks to a magnet system. I remember playing and seeing this for the first time and thought it was really cool! Little did I know this was one of the first cabinets to implement this technology.

Over the years attending California Extreme I’ve been getting more and more in to pinball. I would say I have a tendency to jump on pinball games that have multiple levels of play. Black Knight is no exception, with an upper area with a new set of flippers and goals to hit. I don’t know why, but ever since I can remember playing pinball machines I’ve always liked this concept too!

Lastly it’s worth nothing Black Knight spawned a sequel called Black Knight 2000 was is just as amazing as this original. And, bonus fact, a brand new sequel came out in 2019 titled Black Knight: Sword of Rage, which was on display at CAX 2019 and had humongous lines both days. That’s telling of the evil knights influence and intrigue!

A World of Games: Castlevania: The Arcade

A World of Games: Mappy