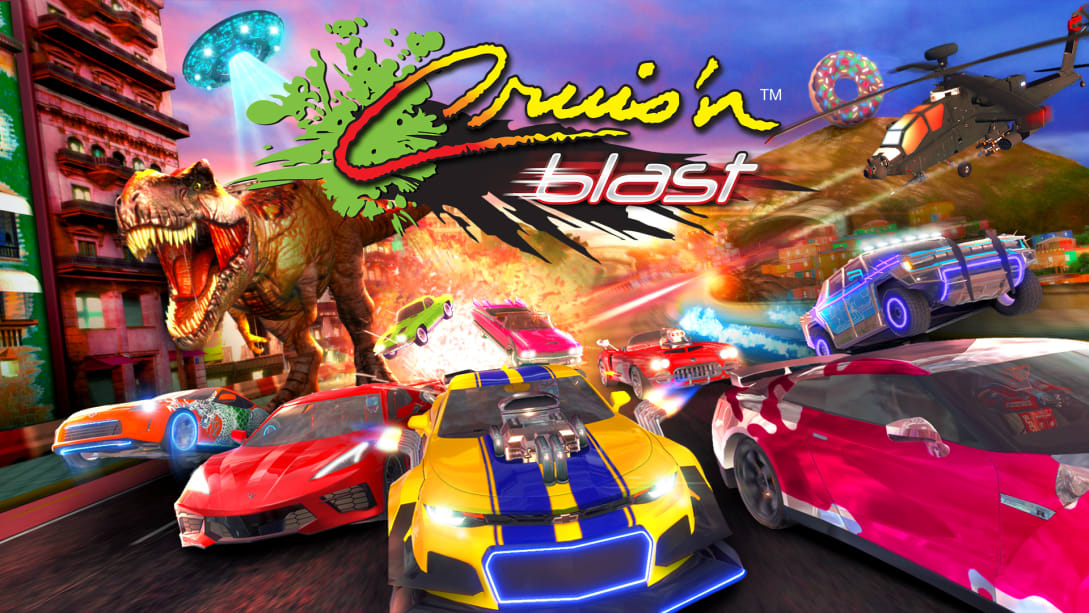 With the recently announced home port from Nintendo’s E3 2021 presentation, what better time to look back at the modern arcade racer Cruis’n Blast!

The original arcade game in the series, Cruis’n USA, as well as the follow-ups were iconic. They had memorable attract modes (anyone remember that announcer bellowing “Cursin!!” over all other arcade cabs?), wacky and fun levels, and a true “arcade racer” feel, which was right up my alley. Home console ports on the Nintendo 64 were pretty fun too, but not quite the same as hopping behind the wheel in the arcades. Interestingly, the series saw a semi-sequel in the form of the arcade racer Fast & Furious, developed and using a similar engine and system as the Cruis’n games, albeit with the movie franchises visuals. That game released in 2004, and then the Cruis’n series remained dormant until the 2017 arcade release of Cruis’n Blast by new company and modern arcade juggernaut Raw Thrills.

You can imagine my surprise when I first saw a Cruis’n Blast appear in one of my hometown’s local arcades. I couldn’t believe it honestly: I thought the series had all but died out, seeing as there hasn’t been a new entry in over a decade. Jumping behind the wheel again, the game has a decent amount of quick tracks for a great arcade experience. A camera allows you to put your face in the game to see as you blaze by one of the other three players racing against you. Stages are exotic and chaotic, like the series is known. Even more bizarre are the roster of racers, including some unlockable weird ones like a horse and carriage, and even a dinosaur. Yeah, it’s great!

If that wasn’t surprising enough, jump to 2021 and you can imagine my surprise then when Nintnedo’s E3 presentation stated Cruis’n Blast would be seeing a home port on the Nintendo Switch. While the arcade game only had five tracks (unless there are hidden ones I’m completely missing), the new Switch port claims to have 30 tracks, with over 20 racers, another improvement over the arcade game. I’m hoping we see some throwbacks to older tracks in the series, because honestly why not. This is likely a budget title fueled by gasoline and nostalgia, so I hope Nintendo and Raw Thrills go all-in on this home port.

As far as arcade racers go, Cruis’n Blast is a fun title that you and a few friends will definitely enjoy in short bursts. Thought it might not have as much appeal as Nintendo’s Mario Kart series, which also has some successful and fun arcade exclusive games, it’s still a fun racer that doesn’t take itself too seriously. And that’s exactly what I want to see in my racing arcade games!

A World of Games: Golden Axe

A World of Games: Monster Eye