After years of going to California Extreme, we’ve found some games that can only be described as “staples.” The games we play and look forward too each year. One of those games, without question, is Great Swordsman.

A one-on-one fighter (kind of), Great Swordsman has you going through bout after bout, besting your opponent in combat. There are three different types of sword-based battles to encounter: fencing, kendo, and gladiator. The goal in each is the same: strike your opponent before they strike you.

What this amounts to is a lot of back and forth. You’ll throw in a stab, only to be countered by your foe. They might try the same, so you’ll need to block accordingly. The gameplay is immediately apparent and approachable. The computer controlled opponent, however, can sometimes be very frustrating. 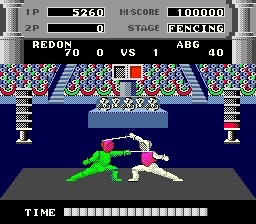 Great Swordsman became my brothers go-to game at the show. I’m not sure why he likes it as much as he does, but because if his appreciation for the game it’s become a running joke between us. And to the games credit, it is pretty fun an addictive.

A World of Games: The Simpson’s