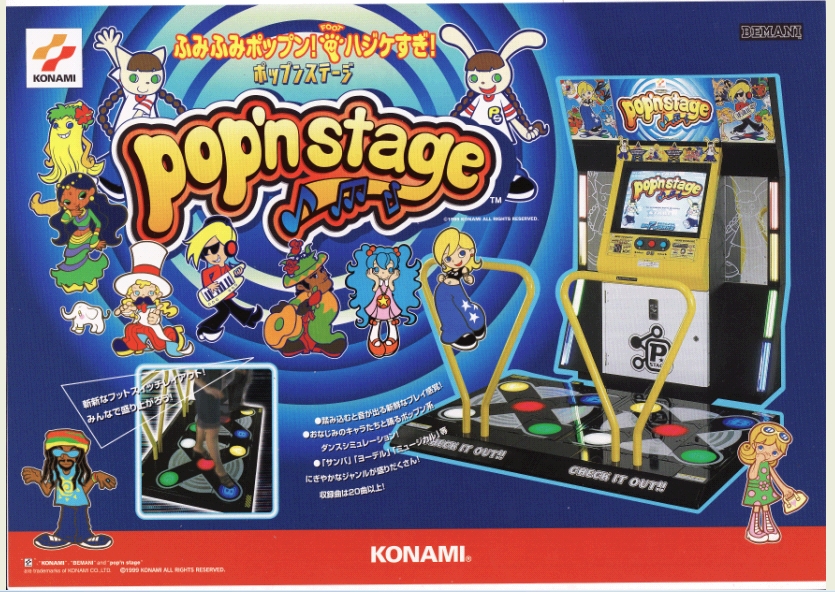 There are so many rhythm games out there. If there’s a way to tap, slide, beatbox, dance, or otherwise interact with a song, Konami and other companies will make a game around it. If you don’t believe me, just check out popular Japanese arcades like Round 1 and you’ll see what I mean.

Personally the only rhythm game I ever got deep in to was Dance Dance Revolution. Stepping on arrows in beat with some pretty rockin’ tunes was a gimmick I got behind real quick.

Konami, the makers of DDR and many other rhythm games, have a cool habit of mixing together their games’ music. You’ll frequently find songs in DDR and BeatMania from other IPs like Pop’n Music and KeyboardMania.

And then there are times when the games just cross over completely with one another, as is the case with Pop’n Stage.

Combining the songs and buttons of Pop’n Music with the dance mat and movements of Dance Dance Revolution, Pop’n Stage is definitely an oddball in the rhythm genre. Stepping on the notes in time with the beat won’t just make you look like you’re kind of dancing, but it’ll play a note to the song as well. It’s a nice little feature that mimics the gameplay of each respective franchise.

Sadly there aren’t too many Pop’n Stage games out there. I’ve only ever seen this one version at California Extreme, and after doing some research found out there might only be one arcade release. If you fancy yourself a rhythm fan and see this cabinet floating around an arcade, I’d say check it out for the uniqueness alone.

A World of Games: Revolution X