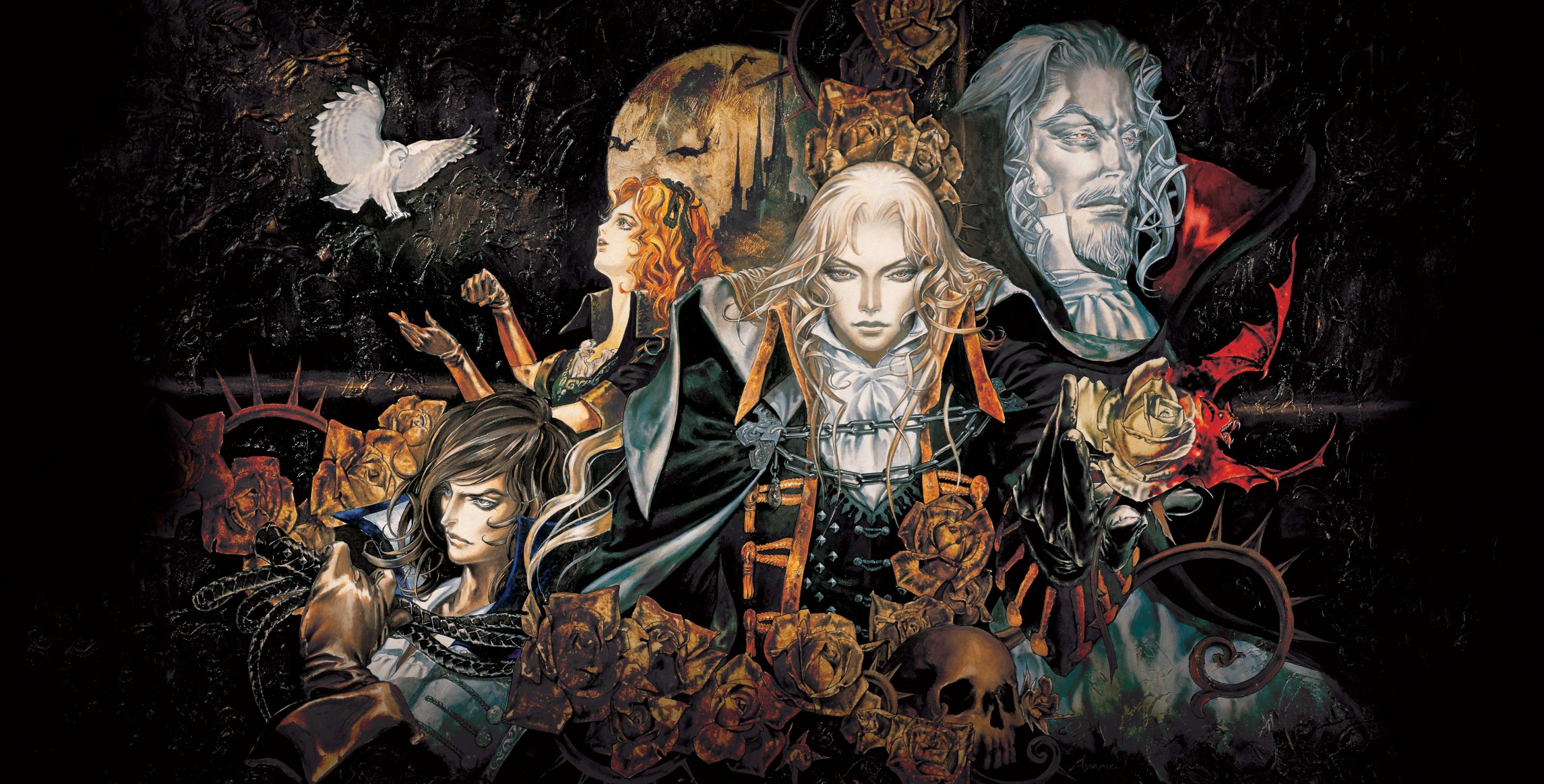 If you’ve been playing games for any decent amount of time, chances are you’ve at least heard of the Castlevania series of horror-themed action RPGs. With it’s origins dating back to the original NES, and the newest releases still coming steadily (spiritual successors included), it’s hard to think of a game series more fitting for this Halloween season. Appearing on virtually every console, with dozens of heroes, hundreds of villains, and plenty of memories, I wanted to take a look back at the genre defining Castlevania series!

My first experience with Castlevania was, appropriately, the very first Castlevania on the Nintendo Entertainment system. My grandma had an NES at her place, and when I would visit, and especially during the summer when extended family would visit, we’d huddle around that old TV and take our chances in Dracula’s castle. Rampant difficulty and childhood skillset aside, I still thought Castlevania was a pretty fun game. It was colorful, had damn memorable music, and I could replay that first level where you kill the giant bat over and over and be content! Something about the ease of whipping enemies, combined with finding new weapons like daggers and crosses, made the gameplay satisfying and left me wanting more!

Well, I got more almost immediately afterward, as we also owned an NES at our home, and had a copy of Castlevania II: Simon’s Quest. This sequel is (in)famous for its gameplay and changes to the formula from the first game. While it kind of retained the same idea as the original Castlevania, Simon’s Quest felt more like how Zelda II: The Adventure of Link felt after playing the first Legend of Zelda. Again, being a younger child and new to games, I kind of just thought this was how sequels were: they took some aspects, not all, from the original game, and made something new. To it’s credit I feel like Simon’s Quest set up the later Castlevania games to become the juggernauts they are, but we’d have to wait a decade for that to happen. 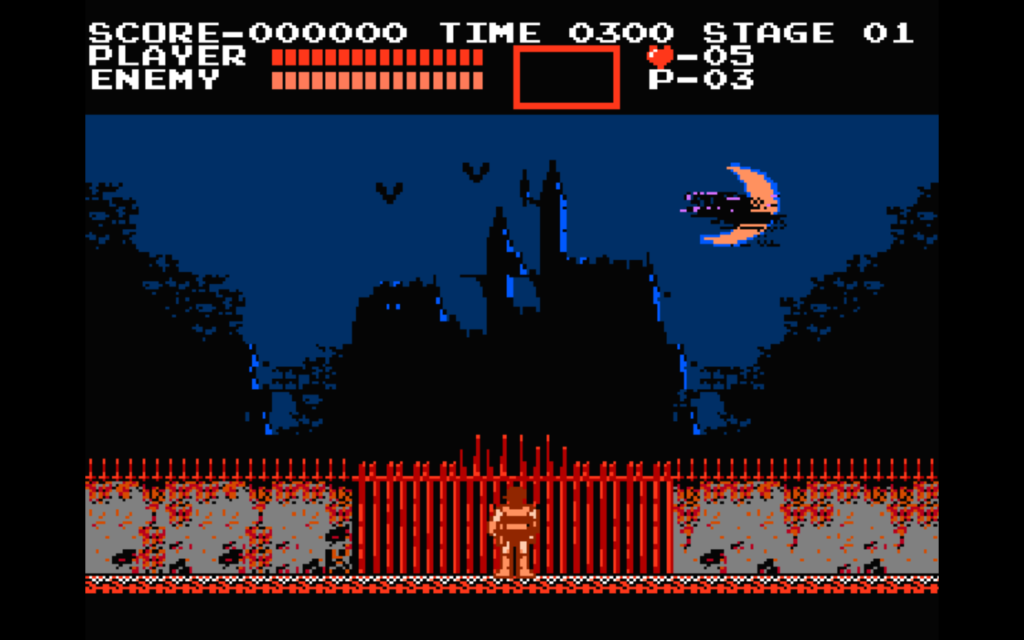 In the late 90s the Nintendo 64 brought us two Castlevania games, both of which were 3D, a first for the series. The first, simplied titled Castlevania, featured gameplay and elements borrowed from the original games, but brought to the third dimension. It was still crazy hard, and how there were other dimensions to conquer as well as the menegrie of monsters that want to consume your soul. I never beat this one or it’s sequel Legacy of Darkness, but I hear they are regarded well in the series cannon.

There were many other Castlevania games released in the early to late 90s, but it wasn’t until 2001’s Castlevania: Circle of the Moon for the then-new Game Boy Advance that I got back into the series. After reading about the new game in Nintendo Power (and even more in the discontinued-too-soon Nintendo Power Advance) I discovered the game had a strong RPG element now: you can level up your character, get new weapons and spells, and pick up special cards which you could use to craft new spells and magics to aid in the journey. I was 14 years old then, and my role playing game bug had already begun to grow, so this was a logical new game to try out. I remember getting it at night: we had Taco Bell for dinner for some reason, and between bites of quesadilla I’d be whipping foes. Circle of the Moon was a fantastic game, and the first Castlevania game I ever beat. It certainly wasn’t the last. 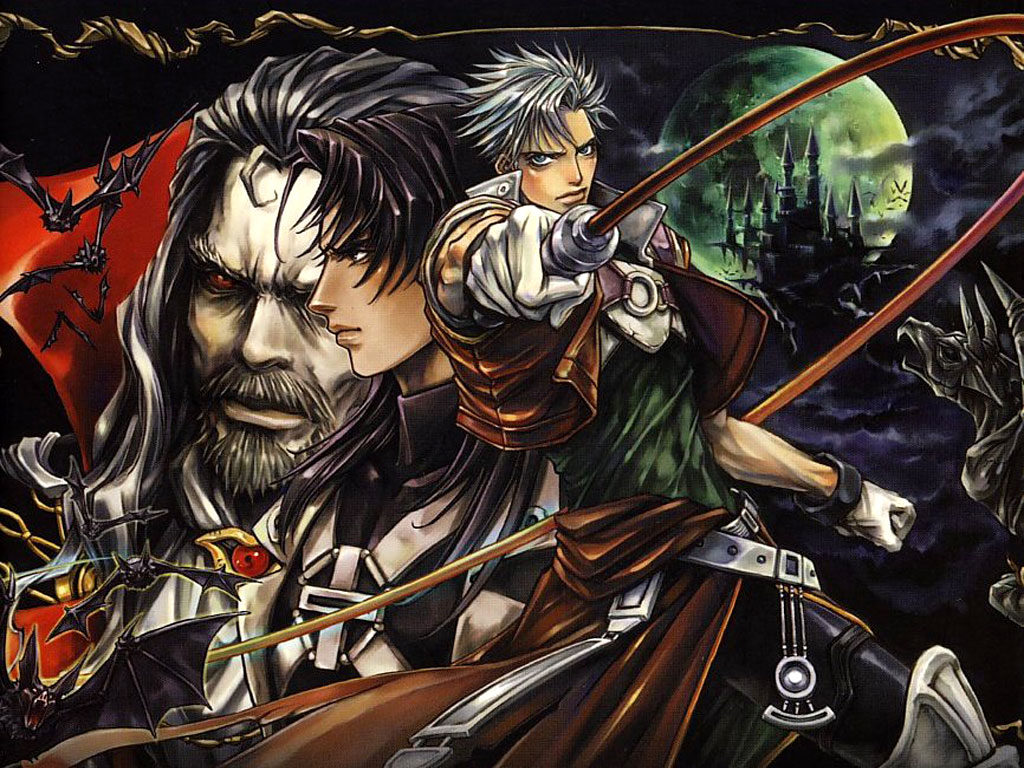 With Circle of the Moon a wonderful experience on the Game Boy Advance, I naturally moved onto Harmony of Dissonance, the game’s sequel, in 2002. Unfortunately I didn’t feel like Juste Belmont’s journey was as memorable as previous, because I never beat the game. It featured absolutely stunning visuals for a Game Boy Advance game, and had more of a character driven narrative, but I felt like the gameplay wasn’t as fun. Maybe missing the DSS cards from Circle left me wanting more than just simple item combinations.

I would remain stagnant in my Castlevania-ing for several more years, and it wasn’t until I went to college that I picked up used what many call the best in the series: Symphony of the Night for the PS1. While Alucard’s adventure on the PlayStation was certainly epic, entertaining, and all kinds of memorable, I felt like there were better games out there in the series (which I’ll get too). Without question however, Symphony was the game that laid the groundwork for the mainstream 2D Castlevania’s to come. Despite the PS2 being around, the handheld’s still had a strong line of Castlevania games to their name.

The last game to release in the Castlevania series on the Game Boy Advance, and the third in the GBA trilogy, was Aria of Sorrow in 2003. Much like Symphony before it, I never played it until 2006, when I was in college. But man, was it worth the wait. Aria was a return to form to me: it got rid of the grievances I had with Harmony, brought back the awesome customization options from Circle, and featured a unique and futuristic storyline that still felt Castlevania enough. The story was a big winner for me, featuring a satisfying twist accompanied by stellar, refined gameplay. Konami had the formula down, and they were not stopping.

Well, now that I had let some years pass, there had been some more releases in the franchise. A few PS2 titles slipped by me, and I dabbled in Curse of Darkness here and there, but I just couldn’t get into the 3D Castlevania. Thankfully the new Nintendo handheld, the original Nintendo DS, had a trio of games that I could play. Firstly was the direct sequel to Aria, Dawn of Sorrow. Playing again as Soma Cruz and company, the game felt like more of the same, albeit in a slightly toned down manner. Using the touch screen to write out spells was novel at best, and gimmicky after a few hours. Sadly, it paled in comparison to the Game Boy Advance original.

Though it ended up taking me a few years to get around to finally completing it, I really enjoyed Portrait of Ruin, the DS follow-up in the series. It featured two interchangeable characters, unique approaches to puzzles and gameplay, as well as an interesting story that wasn’t as cookie cutter as you might assume given it was the 20th game in the mainline series. That damn train puzzle still comes to mind when thinking of this one! Unfortunately I hadn’t received a copy of the third DS game, Order of Ecclesia, until a couple years back, despite it being on many a wishlists for birthdays and Christmas’s. Many call it the best in the GBA/DS series library, so time will tell for sure. 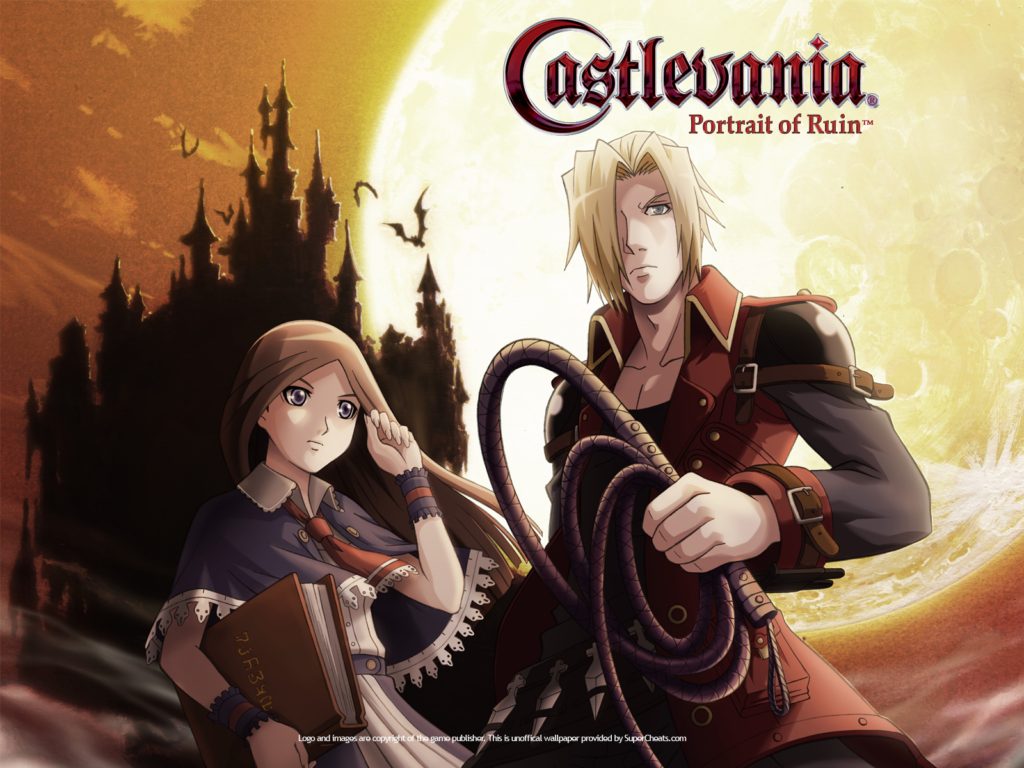 Castlevania got a big rebranding on the Xbox 360 in the form of Castlevania: Lords of Shadow, and since then Konami has been pushing that idea, it seems, into all of the Castlevania titles. I never picked up Lords of Shadow or it’s sequel, but I did end up reviewing the DS spinoff Mirror of Fate. It was a 2D game like the old school/portable titles, which was a great choice, but it still retained the lackluster/generic gameplay of the Lords of Shadow console counterpart. Overall a disappointing game, and one that many felt should have been the turning point for Konami to just start making more 2D Castlevanias.

There have been a few spinoff titles here and there I’ve played, including the sounds-great-on-paper Castlevania: Judgment on the Wii. A fighting game featuring the main protagonists and antagonists from the series’ stellar history facing off in a dimensional rift for the fate of the world. The gameplay was terrible. Maybe a brawler, like a Final Fight or Streets of Rage, style of game would have been a better choice. Really anything other than a fighter. Also on the Xbox 360 was Harmony of Despair, a multiplayer speed-run kind of focused game. It featured graphics similar to Aria of Sorrow, and featured characters from all over the series history. I felt like the grind was a little slow on this one, and the focus on getting better weapons, rinsing and repeating, lost it’s appeal rather fast for me. 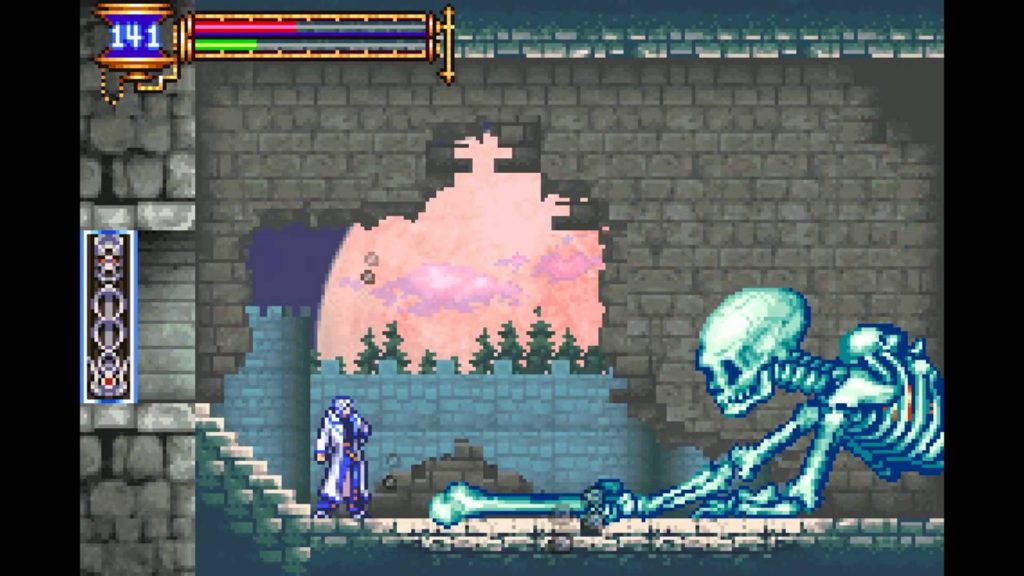 Over 20 years of Dracula, resurrections, and Belmonts, and we’re sitting in 2016 waiting for series director Koji Igarashi to release his spiritual successor Bloodstained: Ritual of the Night because Konami has all but abandoned the franchise. There hasn’t been a new game in the series since 2014. That’s a damn shame, because there are millions of old-school and new fans who would simply drool over the prospect of a new 2D, Symphony style Castlevania.

Personally, the series always struck a chord with me in it’s RPG gameplay, but also it’s music. The series is one of the best in the industry for catchy, memorable, and fitting tunes. From the series themes like Vampire Killer and Bloody Tears to the adventurous Awake and spooky Dracula’s Castle, every fan has their favorite. The music has always changed, but the caliber has stayed the same.

When thinking of Halloween, one usually thinks of something scary. Castlevania isn’t a scary game, but it fits the bill for a Halloween game. It’s hard to imagine a monster, creature, or otherwise that hasn’t been seen in the halls of Dracula’s castle. And for over 20 years we’ve been enjoying slaying demon after demon, rocking out to some sweet tunes, and playing again and again.

A Day of Arcade Games at California Extreme 2015