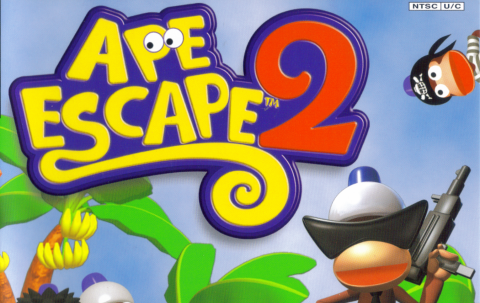 On this edition of “games I wish they’d bring back” we’re going to talk about Ape Escape. Specifically we’re talking about the series’ sophomore entry, Ape Escape 2 on the Playstation 2. Basically the game is more of the same from the first Ape Escape, but with an upgraded visual presentation, more gadgets, and a slightly different story line. Like a lot of sequels out there, if you played the first one and liked it, you’ll find a lot to love in the second outing.

Instead of relaying to you the pros and cons (but mostly pros) of Ape Escape 2 I instead want to talk about the type of game Ape Escape 2 is. No, not an action platforming. Not a sequel game.

I want to talk about how wonderfully video gamey this video game is.

Ape Escape 2 knows exactly what it is: a quirky game that is simple to pick up and play. The game knows it’s funny, and leans into the humor. It’s plot involves mischievous monkeys wrecking havoc across a good handful of cliche levels, so what better way to track those monkeys down than with a slingshot, remote controlled car, and flying machine. Nothing really makes sense, and that’s okay.

In fact, it’s exactly what I come to look for in my favorite types of video games. I’ve treated games as an escape. A way to get out of the real world and experience something different. I love me some Overwatch and Rocket League, but growing up I fell for the fantasy worlds of Mario, Zelda, and more. I would much rather play a video game with bright colors, weird mechanics, and usually a funny plot over a serious game like God of War or Destiny. At first glance, then, you can see why Ape Escape 2 left such an impression.

Putting on my old man gamer hat now, I want to say they just don’t make games like this anymore. I know this isn’t true. Explicitly so. But it’s just so much easier to say a game like Ape Escape 2 doesn’t come around as often on current consoles than it did generations past. Perhaps a better statement would be they don’t make big budget games like this anymore. The more recent fantastic fantasy games to come out on current generation consoles don’t tend to sell that well (I’m looking at you Balan Wonderworld). Smaller budget, indie games still capture this sense of silliness older games exhibited frequently, and I thank developers for that. Speaking of which, have you played the Shantae series? Totally worth your time!

I’ve always wondered as games became more mainstream popular if the perception on what was a “Good” game that could make money was shifted as well. Instead of making something fun or risky, development shifted toward market trends that proved profitable. Devil May Cry lead to God of War which lead to Bayonetta and beyond. You can make the same analogy in every game genre, too. Not a bad thing at all, as some of those games happen to be my most loved games of all time. But the price of that is losing the odd games like Ape Escape along the way.

Looking back on this paradigm shift makes me look forward to what could be in the future. As mentioned before, there’s a lot of promise in the smaller video game these days. Triple A games can be out-shadowed by smaller gems like Hollow Knight or Hades. Bigger games like Final Fantasy XV can still be big-budget powerhouses, but Square Enix is still making “What the Hell?” games like Stranger of Paradise, and I can get behind that. The market is big enough to welcome all these types of games back, and we can only benefit from it doing just that.

If for no other reason that getting a brand new Ape Escape game.
Oh, and if we can throw a new Clay Fighter in there too, that’d be pretty great.
… and would it be too much to ask for a new Klonoa game? Thanks!