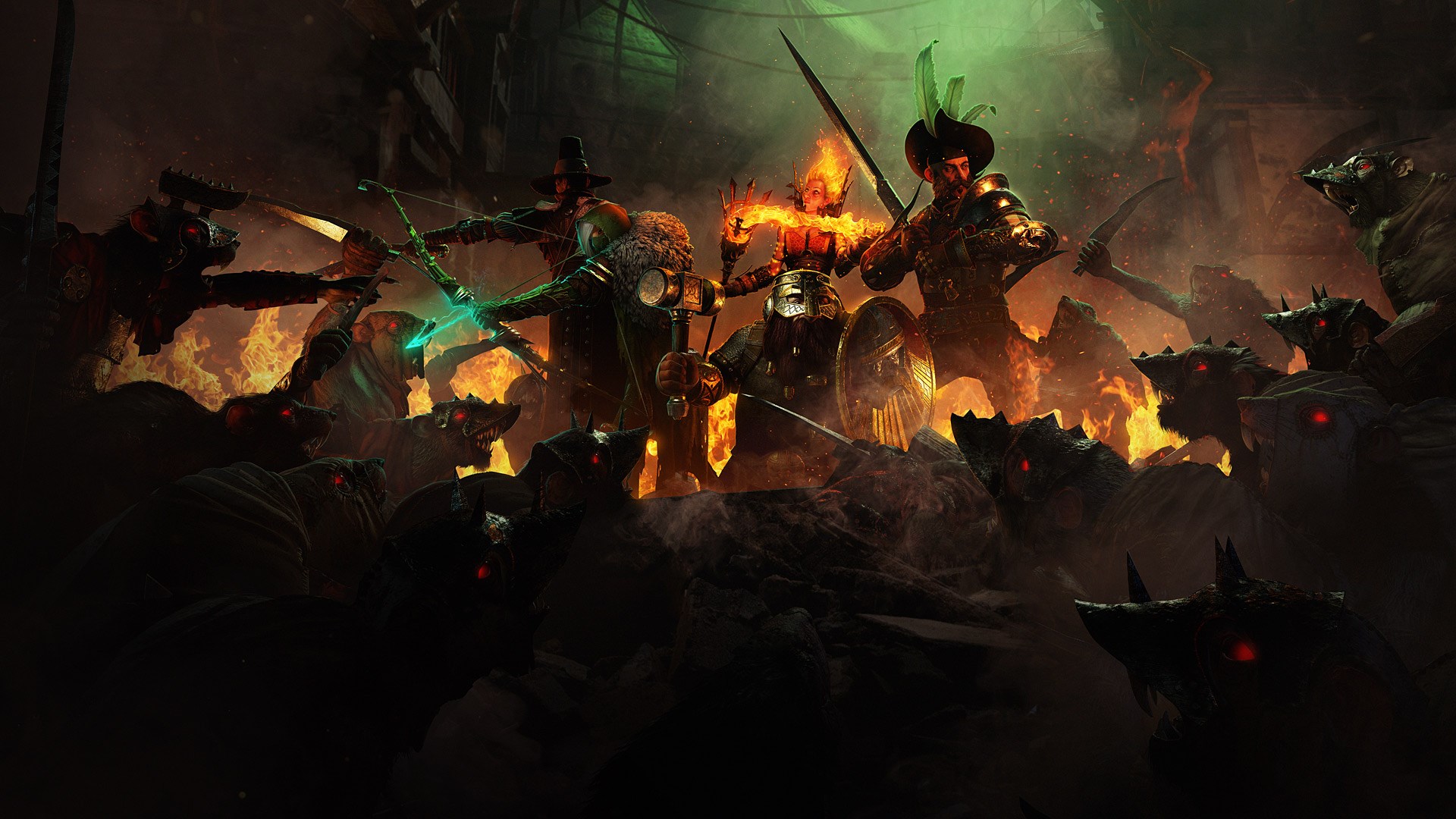 Playing games with friends can go one of two ways: Either competing against one another, or playing together cooperatively (and sometimes both). Competition has always been a staple of multiplayer games, all the way back to the early days in the arcades. Cooperative games are nothing new, and one could argue they are in their prime right now. For me personally, the genre of co-op gaming hit a peak with Valve’s Left 4 Dead.

Since that game’s release in 2008, the 4-person zombie apocalypse shooter has defined the co-op shooter. Every other game attempting to replicate the gameplay was always met with criticisms and comparisons to it. The formula worked so well, it essentially spawned a sub-genre all its own, and so many other games attempted to emulate Left 4 Dead’s success.

While I am extremely late to the party, my friends and I recently picked up Warhammer: The End Times: Vermintide for PlayStation 4. Often regarded as the best Left 4 Dead type game since Left 4 Dead, Vermintide takes place in the Warhammer universe of high fantasy. Dwarves, Elves, and magic are commonplace, as are seemingly countless rat-people swarming all over the kingdom. I admittedly have never played anything Warhammer, tabletop, video game, or otherwise, so I know little about the world.

I do know about Vermintide, having now played for several days with friends. The comparisons to Left 4 Dead are apparent from the very beginning. Your team of four unique heroes battle waves of enemy anthropomorphic rats hindering your progress toward a goal. Hordes of rats come at you from all angles, much like the zombies in L4D. The comparisons the Valve’s shooter are most egregious when you include the special infected, I mean the special rats the game throws at you. Gutter Runners are like Hunters: sneaking around and lunging towards the player. Packmasters are like Smokers, grabbing players and dragging them away from the group. There are even Rat Ogres, which are beefed up rats just like Tanks. There are others, but the lone unique special rat is the Ratling Gunner, which carries a large machine gun that deals massive damage if left unchecked.

No matter where you look, you’re going to find comparisons between these two games, and for good reasons. However, I wanted to highlight what the game does differently that I’ve been enjoying.

Firstly, the game has unique heroes and loot, similar to a game like Diablo, but much slower in progression. After a stage is completed you gain experience and level up, earning you loot. Then you get a chance to roll loot dice to earn even more loot. Items you earn are either melee or ranged weapons for one of the games five playable characters. Much like Left 4 Dead you’ll be replaying stages over and over, but unlike Left 4 Dead you’re doing so to get better items. The grind is incredibly slow, but vastly more rewarding. For example, I unlocked a very simple yet powerful ranged gun for the Dwarf, and had a reinvigorated interest in playing him over anyone else.

The stages in Vermintide offer the next major difference. L4D’s levels had a large emphasis on atmosphere: running through the hospital was unique, while escaping through a mall was interesting as well. However, no matter which level you were playing the goal was the same: get through to the end and escape. Vermintide also has you escaping at the end of each stage, but the means to do so are more varied. One level has you traveling upward through a wizard’s tower, culminating in your assisting with casting his spell. Another stage has you going through sewers to disinfect the town’s water supply. The variance of stage goals gives each level a different feel. Some stages rely on battle prowess, and others on working together toward a goal. I enjoyed this addition to gameplay, and would say it one-ups Left 4 Dead in the area.

As stated earlier, additional weapons are gained after every stage. These new weapons can slightly alter your hero. For example, the Witch Hunter can wield dual pistols to fire in quick succession, or he can equip a stronger single gun for more instant, but slower, firepower. The Elf can use twin daggers for swift, weak strikes, or she can use a traditional sword for more immediate damage. These small changes in how a character plays offers quite a bit of variety between roles. If you don’t like a weapon you have, or if you’re carrying an excess of items after several play sessions, you can use the Forge to craft, upgrade, and salvage items. There is also a Shrine you can use to enhance your current weapons as well. Overall, there are resources for you to utilize to truly make a character that fits your playstyle.

For how chaotic the gameplay can be, Vermintide does feel like a lot of spamming melee attacks. Perhaps it is because we are still playing on normal difficulty, but most fights are solved by hacking away at swarms of rats, and occasionally shooting Gunners from a distance. I unlocked a nice new sword and hand axe for my Dwarf as well, and it’s extra ability to block and shield bash away enemies has been useful in battles. I am hoping as the game goes on these minor tweaks to how a character plays in battle will have a larger impact on the team-based cooperation.

While I hear the game’s sequel is the better game, I am still enjoying my time with Vermintide. The stages are fun to play, and they are unique in their execution. While I don’t think Left 4 Dead is going to be replaced by another co-op game, if we can get more titles like Vermintide that really play off that game’s strength and make welcome changes, we’ll be playing excellent games together for a long time. Here’s to more fun slaying rats and zombies!