What was meant to be the Wii U’s swan song (which it still kind of is, I guess) also happens to be the Nintendo Switch’s biggest reason to abandon the Wii U entirely and dive right in the the newest console. That’s just what I did when I secured my Switch last week, and I’ve been playing Breath of the Wild almost nonstop since. There are plenty of stellar reviews out there, and I read something like over 80% of Switch users also bought BotW, which is an astounding attachment rate, but is the hype behind the latest Zelda game warranted?

Being perfectly honest, The Legend of Zelda: Breath of the Wild is a marvelous game so far, and it has a lot of potential to continue to be excellent as I keep journeying on. Much like legendary RPGs like The Elder Scrolls V: Skyrim or action heavy open-world games like Far Cry, Breath of the Wild has that “just one more” aspect to it. As you explore the world, you really get a sense of adventure looking around. I wanted to know what was over that mountain top. I needed to see why those stones were arranged in a swirl pattern. I had to clear out that moblin came to get their loot! Every aspect of the game oozes content to keep you playing. Not many games achieve this sort of gameplay, though many open-world games strive for it.

Rather than give a full-on review (and seeing as I’m only 20’ish hours into the game), I instead want to address some issues I have with the game, others’ reviews, and my thoughts in general. First and foremost, I want to talk about the weapon durability system.

Almost all of the reviews I’ve read, both professional and from friends, all address this system. If you’re unaware, in BotW you can pick up a ton of different weapons, ranging from swords and spears, to skeletal arms of fallen foes and boomerangs. After some use, the weapons will break and you’ll be forced to get a new one. Thankfully you can store several weapons at once, so you won’t be out of luck entirely. The problem some have is this: weapons breaking takes you out of the action and makes you constantly scour the world for more weapons. It’s a valid point: you’ll break a ton of shit battling your foes. And yeah, it’s kind of frustrating having to switch (see what I did there?) between your weapons all the time, but… I kind of like having to change my weapons around! 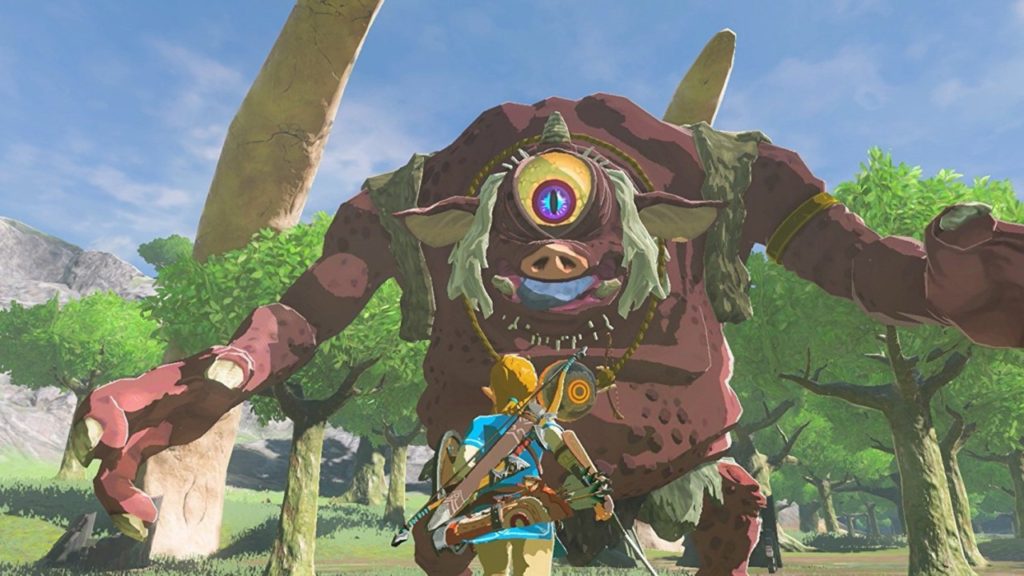 In past Legend of Zelda games, Link was always armed with a sword. Master Sword, Kokiri sword, white sword, anything sword-like, and Link used it. On the off chance you were given something else to use, like maybe a spear in Wind Waker, it would quickly be abandoned when the sword could be used again. In Breath of the Wild, having you actually use a variety of weapons not only changes up gameplay drastically, it puts a sense of pressure on every encounter. Never before in a Zelda game have I found a group of enemies and been like, “yeah, no thanks, they’ll destroy me,” and just moved on! The danger is somewhat superficial thanks to this system, but it does put a very different feeling on an otherwise generic formula.

A second gripe I’ve heard, mainly from other friends, is how the game is open-world, but there isn’t much to do in the world. You’ll run around Hyrule field and beyond, scarcely seeing another soul outside of some wildlife and a few moblins. Every now and then you’ll see an encampment of people, or a stable outpost off in the distance, or maybe some large ruins you’ll want to explore, but that’s it. While this argument is totally valid and I can understand where the proponents are coming from, I have to ask them to take a step back and look at what you’re playing: this is the very first truly open world Legend of Zelda game. The developers wanted to give you, the player, a chance to explore and play however you’d like. They didn’t set out to create something like Skyrim but in the Zelda universe: we imagined the game to be like that and were sorely disappointed when it wasn’t. This doesn’t make it a bad game. In fact, I think the “lonliness” you feel in the world makes for the already bleak premise even bleaker: there really isn’t too much civilization because Ganon literally killed them all a century ago! Would I have liked to see more stuff/people/things going on around me as I run around, of course. Am I still happy there’s plenty to do in a beautiful environment, hell yes! 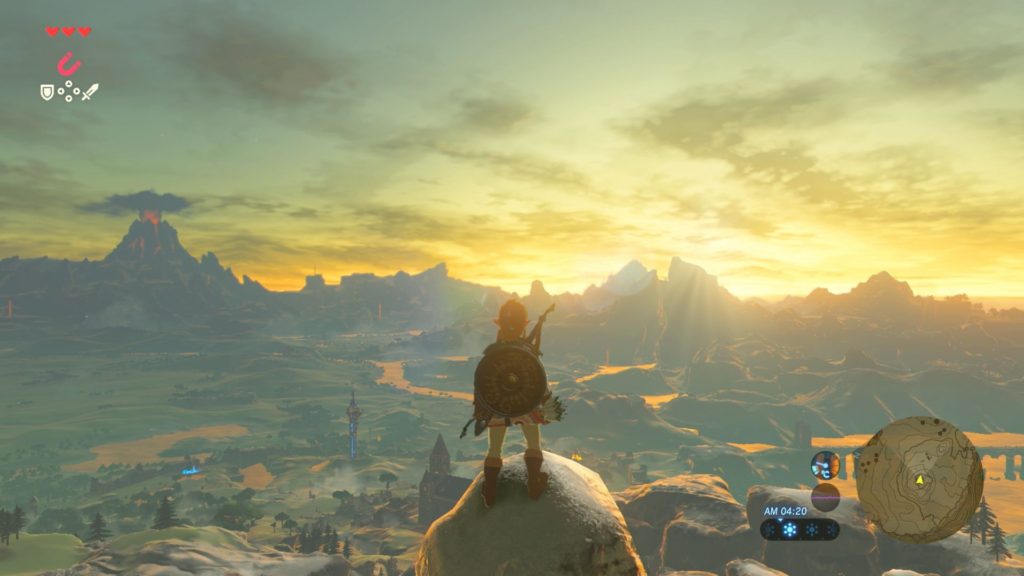 Now let’s get in to my own thoughts about the game, the first of which being the stamina system. In other open-world games you might see something like a stamina bar. Skyrim had them, limiting how much you could swing your weapon or run before having to slow down. But the new contender in the ring, the PS4 exclusive Horzion: Zero Dawn, has no such stamina system and allows you explore as fast (or slow) as you’d like and doesn’t “penalize” you for doing so by making you slow down. Perhaps it’s because Laura’s playing Horizon usually whenever I’m playing BotW (Woohoo for off-TV game consoles, Nintendo!), I can draw that comparison quite easily. But is it all that bad?

At first, I thought the stamina bar was awful: Link could barely tie his boots before having a coughing fit. But, as you go through the game and complete Shrines which reward you with tokens, you can unlock a bigger stamina meter to do, well, more stuff before you get tired! It sounds lame when you just read it, but in-game it feels rewarding. After leaving the game’s initial tutorial zone I could barely climb a small hill, but now Link is scaling mountains like a boss! Seriously, the dude just jumps up, gets a grip, and goes! In a total comparison reversal, just before writing this I was watching Laura play Horizon and she needed to get to the top of a mountain pass, and all I was thinking was how Link would be all over that in a heartbeat, but Aloy had to run through the winding path like a chump! Breath of the Wild’s character progression is slow at best, but rewarding nonetheless!

Finally, I want to look at something I’ve been doing a lot more of in real life and now every chance I get in game: cooking. BotW allows Link to whip up all sorts of tasty dishes that not only replenish his hearts, but also grant stat boosts and other benefits as well. Early on you’re greeted by a zone that cannot be traversed unless Link either has a special cold-resistant tunic, or you cook some meal that raises cold resistance for a set period of time. There are more of these little environmental zones scattered throughout the game, and I think it adds a lot of depth to the game by allowing you to go to these zones before the developers clearly intended you to. I mean, that was kind of the point, allowing you to go wherever you wanted, whenever you wanted, and this small yet intricate system allows you to do so. Cooking is as simple as adding ingredients together, usually a base like meat or fish, adding in some fruits or veggies, and cooking them over a fire. Honestly the hardest part about cooking so far has been the “over a fire” bit, since finding cooking pots scattered throughout Hyrule is about as hard as finding the Triforce in Ocarina of Time. Assuming you do, you’ll be treated to a fun time mixing together your goodies (which the game liberally gives you as you explore, defeat foes, and help out others), and eventually you’ll create tonics and kabobs that boost your stats, which you’ll then take into battle when going against those extra tough foes. Personally, I’m a fan of the stamina refilling recipes, because they let Link restore some of his stamina meter allowing him to do more. The concept of Link literally hanging on a cliff chowing down on some fish really makes me laugh. 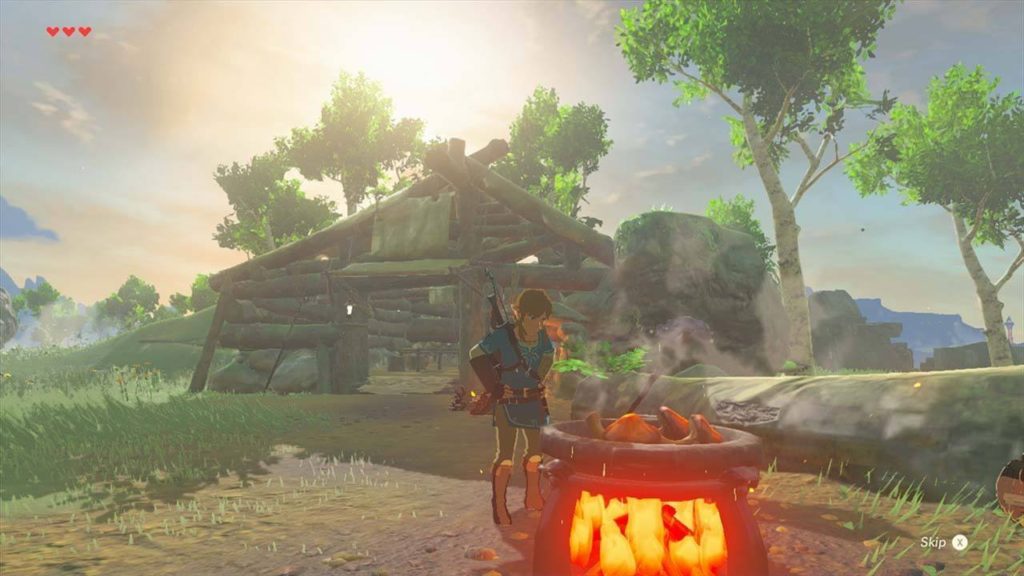 Without getting into much further detail, I want to leave on this: The Legend of Zelda: Breath of the Wild is unlike any other Zelda game before it. Hell, it’s unlike any other Nintendo game before it. When the PS3 and Xbox 360 came out, Nintendo was seemingly centuries behind with it’s tech, but I always stuck by them because despite all that they managed to create fun, enjoyable games for multitudes of people. However, they couldn’t ever give me the quality of games like Mass Effect or The Witcher on their console. I feel like Breath of the Wild is Nintendo’s first, and first successful, attempt at a truly “next generation” game. The tech behind the Switch is nothing when compared to the PS4 and Xbox One, but that isn’t the point: Nintendo has managed to create a game that not only feels like a Nintendo game, but also feels like an experience you’d get on the beefiest of consoles. And that is why there are so many incredibly favorable reviews for this game.

But you know, I’m probably not even halfway through the game, and all of this can change when I get pissed off after my 10 millionth Hero’s Broadsword shatters mid-fight. Or when my amiibos keep giving me crappy items. Or when I can’t ever seem to find any horses! Where are the horses! Anyway, what do you all think of the newest Zelda game? Is it everything you’d hoped for in the last game on the Wii U and the first (and right now really the only) game on the Switch?