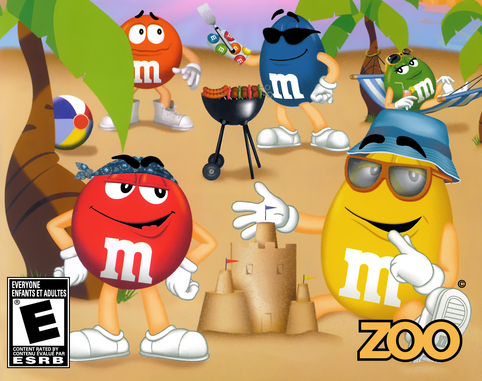 As is the nature of many game collectors, we tend to get quite a few games in our libraries that don’t really have any saving graces to be there. Occasionally I’ll get a game I took a chance on that turns out to be decent if not good (Check out The Munchables on Wii for example). But more often than not we’ll take a chance on a random game and it turns out to be complete trash (Check out Dino Strike on Wii for example).

And then a game like M&M’s Beach Party shows up, and isn’t so terrible we can outright ridicule it, but it isn’t good so we can’t straight up recommend it either.

The struggles of game collecting, I’ll tell ya.

If you aren’t versed in your M&M’s video game trivia, there are a few games on the Wii and other platforms that cash in on the, I don’t know, M&M’s craze, I guess? Sticking with just the titles on the Wii there’s M&M’s Adventure, which is a platformer of sorts, and currently the only M&M’s game on Wii I haven’t played. Next up there’s the laughably awful M&M’s Kart Racing. That can be a piece in itself, so I’ll save that for later. Lastly we have M&M’s Beach Party, which brings together six minigames for you and up to three friends to enjoy.

In all honestly M&M’s Beach Party isn’t bad, it’s just that everything it’s striving to be has been done better by other games.

There are six games to play: Kayak Racing, Ring Toss, Mr. Runch Slam, Volleyball, Skeeball, and Colornator. Let’s break each one down:

Kayak racing is just like it sounds: you’re racing your kayak to a goal faster than anyone else. To control the kayak you swing the Wii remote down when prompted. Good timing boosts your speed, and misses slow you down. It’s straightforward and shows all it has to offer in literally two minutes.

Ring toss was perhaps the most balanced and well crafted game. You find yourself on the pier and your goal is to toss rings on to floating buoys. You can actual unlock an option where the buoys move ever so slightly, giving a bit more depth to the minigame. To throw the ring you move the Wii remote as you would if you were throwing a frisbee, and though I sucked at this motion as I do with throwing real frisbees, this still worked well and felt natural. So, kind of a win all things considered.

Mr Runch Slam, if you can’t tell by the name because who in their right mind could, is M&M’s Beach Party’s take on that carnival game where you have a big mallet and your trying to hit a small launcher to have your frog or what-have-you flip on to a platform moving in water. I think the name of this game IRL is frog flip, but I could be mistaken: I haven’t been to a festival in years. The M&M’s Beach Party version is kind of skewed because no matter how we slammed the Wii remote, we couldn’t really get it to accurately show in the game. Also, it seemed like no matter how hard or soft you hit the pad, the Mr. Runch (which is apparently the name of the object you send flying???) went the same distance. Again, the game showed what it had to offer very quickly.

Volleyball is easily the most diverse game present. It’s a beach party afterall, and what would a beach party be without volleyball? There’s a 2v2 option, and I’m assuming a 1v1, but we never played it again to figure that out, because two matches was enough for a lifetime. The game just wasn’t responsive. On several occasions we would find ourselves setting the ball to our teammate only to have them flail wildy in the air and completely miss. That is if we were able to even serve the ball, which in and of itself was a feat. The game offered a few different shot types like slams, passes, and sets, but the easiest way to keep a rally going and hit the ball was to simply wiggle the Wii remote whenever the ball was on your side of the net. Since your character moved automatically, volleyball became a boring wag-fest and not a competitive sport. Bonus points though have to be given to the absolutely hilarious facial expressions of the M&M characters in the mode. They all look like they are so happy to be there! 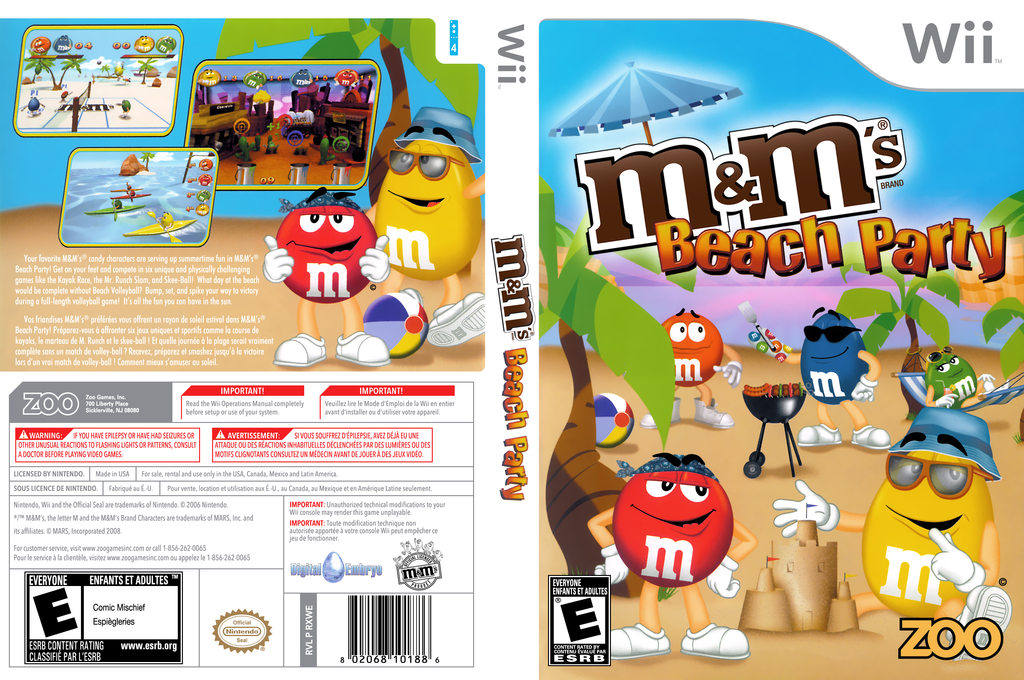 Skeeball was the game I had the most fun with, even though I lost horribly. It’s Wii Sports Bowling is everything but name. You use the same motion to throw your ball, except you are trying to get your ball in to one of four point rings. Or, if you’re lucky, you could just get the ball right outside the ring but still have the game register you earning points. This actually happened multiple times to different people, and it made the game more exciting if you can believe it. Imagine it though: even if you don’t land in the right ring to get points, maybe you’ll still get points anyway! It would certainly make the game more exciting, that’s for sure! The first player here to get 300 points, I believe, is the winner.

Lastly we have colornator. What’s colornator you ask? It’s a shooting game where you shoot your M&M’s colored ink at moving grey M&M’s in a wild west setting. Duh! This game was the only game that used the pointer to a significant effect, and it fell flat. It’s not bad, per se, it just could have been so much better. There is depth to deal with, which I was absolutely stunned to see in a game of this quality, and once you mastered how the depth/shooting worked, the game became very repetitive. There were only like 10 different M&M’s to shoot, and after they popped up and ran off the screen, their appearance pattern would repeat. Again, nothing fundamentally wrong with the game here, just nothing outstanding or worthwhile. One time through this and we were done.

In the amount of time it took you to read this article, you could have literally played the entirety of M&M’s Beach Party. Don’t feel bad. Honestly I did you a favor by letting you skip out on this game. M&M’s Beach Party is an obvious case of Wii Shovelware: a game made on a budget with the sole purpose of its existence to be luring unaware consumers into buying it. While playing, a friend asked why anyone would buy this game. He’s right: why would anyone, aside from myself and my group of sadistic friends, buy this? There’s an answer to that question: the unaware gift buyer looking for something to get their loved ones, knowing nothing about video games buy knows the branding, and plopping their hard earned money down.

Thankfully there hasn’t been another M&M’s video game released since.

Lastly I want to reiterate that M&M’s Beach Party isn’t a wholly awful game. It’s just not a good game. And no one should play it. That makes it sound bad, let me rephrase. No one who doesn’t want joyous mediocrity from their favorite “Melts in your mouth, not in your hand” candies should play this game.