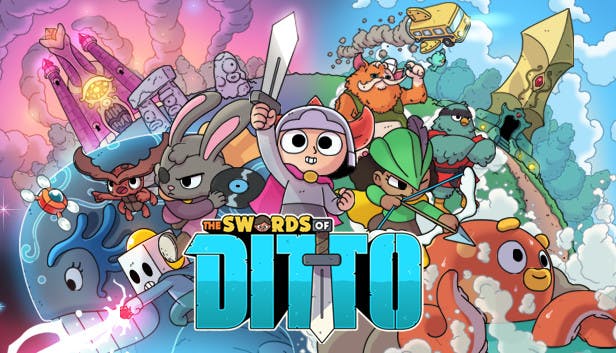 It’s not unusual for a game to come out around the time another game with similar characteristics comes out. Even worse when you put off playing a game for several months, only for a sale to roll along including multiple games of the same genre you want to play. This is precisely the scenario I experienced with both Moonlighter and The Swords of Ditto for Switch. I picked them up before a long vacation, and have completed both.

Both games are rogue-lite action RPGs. Both games feature upgradeable items and weapons. Both games offer replay value upon first completion. Both games have a unique art style.

But after watching the credits roll, I found myself a bit more satisfied with one game over the other. So let’s compare the two to discover which one reigns supreme as the best rogue-lite on Switch (at least of the ones I’ve played).

The visuals are easily the most striking feature for Swords of Ditto. The entire game looks like a children’s animated world come to life. Bright colors, cheerful characters, and a lot of humor. Graphics aren’t a big selling point to me unless they are like this: fun to look at and different from other styles on the market.

Moonlighter also has a non-standard visual style, with the retro HD 16-bit style. During gameplay everything is pixely like an old SNES game, but there’s also a handful of pretty pixel art closeups scattered throughout. Though pleasing to look at and running smooth, the winner here is Swords of Ditto if for no other reason than how cute and non-standard the visuals truly are.

Moving on to the gameplay we can really see the similarities start to break off. Moonlighter’s whole gimmick is the titular shop Moonlighter: You play as shopkeeper of the humble store in a small town, filling your shelves with goods and materials you discover while searching in the dungeons. It’s a great concept that has definitely been done before, but it doesn’t make it any less engaging and addictive. Add in a restrictive inventory management while in a dungeon (you can only carry as many goods as will fit in your tiny backpack, and some of those items have restrictions on where they can be placed in said backpack)..

Swords of Ditto by comparison is more of a standard rogue-lite game. You move around randomly generated maps and dungeons, collecting randomly generated items and materials, in hopes of getting powerful enough to take on the big boss. I say standard, but it’s still done well: I have certainly played worse rogue-lites in my day. Though I still believe there are some general flaws with it, I would still consider Moonlighter the better overall game, largely because the shopkeeping element is satisfying and addictive.

Having written so many reviews before, its easy to fall into a similar structure for each. That is why I’m so happy I get to actually include a technical flaws section, because each game has a few. Moonlighter suffers from random glitches that range from annoying to really awful. In my game I had instances where enemies wouldn’t animate properly, so they would be facing one direction but shooting in a different one. I also had several issues with my inventory showing bad item placement warnings, but there was nothing warranting this warning. Laura actually had the game straight up delete stacks of items when she would move them from her backpack to her storage chest back in town. Not cool, Moonlighter.

The biggest gripe with Swords of Ditto is the load times. Holy crap the load times! I am not sure if this was just a Switch version issue, but moving between zones would result in 20+ second loads! It gets worse when you realize in subsequent playthroughs there is an ethereal monster chasing you that you can’t kill, meaning you have to run from screen to screen, load time to load time. Usually I wouldn’t mind a load time, but these were so frequent and aggressive, it was hard to ignore. This time both games are losers: these are issues that should be fixed to better the overall gameplay.

Lastly I wanted to discuss each games charm. Charm is the stuff you can’t categorize. The bells and whistles that make you happy to play. Or the moment you realized you were having fun with all the game had to offer, gameplay, music, and all. Moonlighter’s charm is almost immediately noticeable: you have a shop you can run with patrons who dictate the demand for your supply. It’s driven home even further when you are the one procuring said items. Watching your little shop and town grow and thrive, while unraveling the mystery of the dungeons themselves, is rewarding and fun.

In comparison, Swords of Ditto has a unique premise that every 100 years or so an evil threat emerges, and a new hero, dubbed the Sword of Ditto, would rise up to battle the threat. Each new hero you play can inherit some skills or items from the previous Sword of Ditto (Kind of like the amazing Rogue Legacy), as well as starting with some special skills. Getting powerful and keeping some of that power to hand down is definitely a plus. But I think it’s the game’s humor that really stands out: Sure, there are lots of poop jokes and childish fun, but that’s what makes the game special. It all comes together in a complete package, with each aspect playing off the others.

So what’s the bottom line? Swords of Ditto looks prettier, but the overall gameplay of Moonlighter is better. Both games have their flaws and both games have their charms. When thinking about which game I actually enjoyed more, I have to give it to Moonlighter. At it’s core, Moonlighter was better structured. I felt like I had a goal I could obtain, and my means of getting there were entertaining. Swords of Ditto didn’t always have that: after a few deaths and playthroughs, I didn’t feel like playing again to do the same things in the same area, with slightly different gear. It’s not a bad game, by any means, it just wasn’t as enjoyable as the other.

I picked these two games up on sale knowing they were quite similar, but not actually thinking I’d play them both in succession. In so doing I was able to see the strengths and weaknesses of the two, and actually got a better feel for what I like in a game. Though I likely won’t be doing and comparison-specific purchases any time soon, this was a cool format to see how two games truly compare.

What do you think of The Swords of Ditto and Moonlighter? Have you played them yet? If you have another rogue-lite game you liked, what is it (because apparently this is becoming my new favorite genre)? Let me know; I want to hear from you!