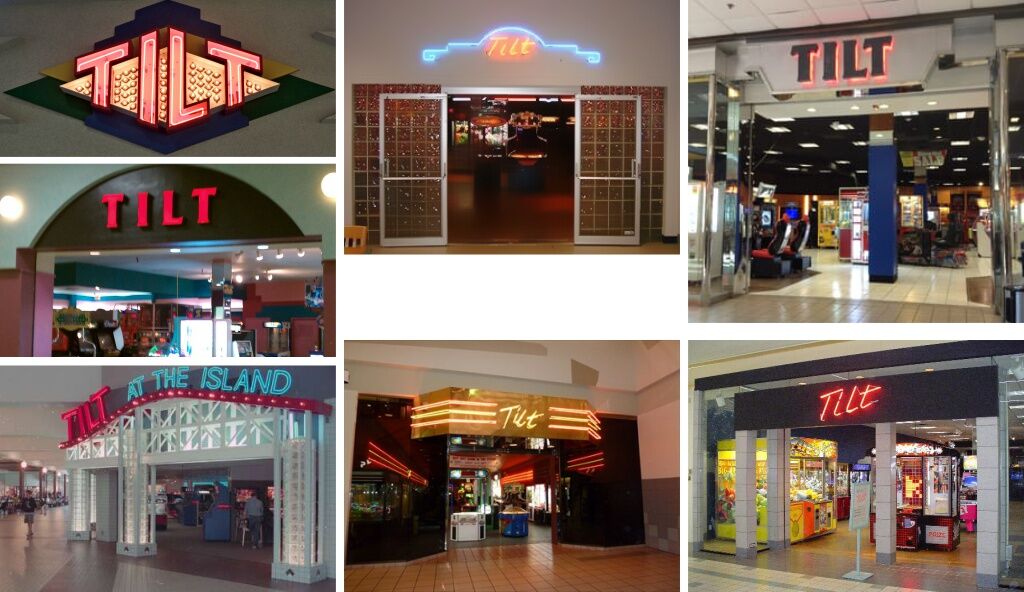 My arcade experience starts in the mid-90s. I was something like 6 or 7 years old. I wasn’t able to stay at home by myself, and my parents wouldn’t let my brothers watch me while they were out until a few years later. Whenever mom or dad would need to go to the mall for something, I was essentially forced to tag along. I didn’t mind though: the mall was where I could get something tasty to eat at the food court, possibly get some toys at the toy store, and maybe, just maybe, I’d get to go down that long hallway with the restrooms and play some games at TILT.

The arcade was tucked away down a hallway between a few clothing stores. And yes, it was literally the same path one would go down to use the restroom. But if you kept going down that path, you’d eventually hear the blaring sounds and see the glowing lights that can come from nothing other than arcade machines. Walking into the dimly lit room, you’d be greeted with the newest additions to the arcade. Typically these would be the big games people wanted to play, like Street Fighter II, Primal Rage, Killer Instinct, and any other competitive game at the time.

While these fighters absolutely affected my gaming interests, at the time I was interested in one thing and one thing only at the arcade: Tickets! I could play Solar Spin to get some easy tickets, or challenge my mom to a game of Skee-Ball knowing full well she’d give me her tickets too, no matter who won! As a kid, being able to turn quarters into tickets, tickets into spider rings or candy, and if you kept said tickets for the big buck items like huge plushies, it was like a dream come true!

Years and years of playing redemption games lead me and my family to have amassed a ridiculous amount of tickets at TILT. I remember my mom having a plastic grocery bag full of bundles of tickets as well as tiny coins, because certain games awarded coins instead of tickets. There were literally thousands of tickets in that bag. We would bundle them in groups of 50 or 100, and when we’d turn them in to the prize booth I would feel so badass getting some high value item while another kid only got the flavored tootsie rolls. A large green snake plush does come to mind as one of my finer achievements.

As the years went on, my tastes in games changed. Watching the games my brothers played, namely those aforementioned fighting games, really made my appreciation for TILT change. It went from being this place to get tickets to a place I wanted to bond at with my brothers. Killer Instinct stands out here, as well as the absolute classic beat’em up Captain America and the Avengers. We would play arcade games whenever we saw them, not just at TILT: a few local pizza places, for example, would house some games we’d enjoy. But I always found myself gravitating toward TILT as the place to be to really play arcade games. After all, that’s the entire point of TILT.

At some point in my early teenage years, TILT closed for a short bit and changed locations. It was still in the same mall, but no longer was it in the back hallway, segregated from everything else the mall had to offer. Instead, this new TILT location was front and center: It was a huge open space next to all the other storefronts. This tilt was more of my own experience not shared as much with my brothers. My oldest brother was off to college at this point and about to get married. My middle brother and I were in that phase where I feel like we didn’t really talk to each other all that much. No hard feelings: just getting older. Despite this, I still found solace in TILT.

At the front of the arcade were now games to attract veteran players and newcomers alike. Marvel vs. Capcom 2, Tekken 3, and Terminator 2: Judgment Day are some I remember. As you would go further back into the room you’d find some crane games and retro titles like Pac-Man. One big omission however were the redemption games: There were a few left from the move, but largely they were gone. A year or so later, and the redemption and tickets were all gone (thankfully I had cashed all mine in at this point).

While in middle school one of my brothers friends actually became a manager at TILT. Not only was that the dream job in my mind, it was also pretty sweet to know someone that worked at an arcade. I remember he was the first person to turn me on to the game Tekken 3: I think he saw my interest playing games like Mortal Kombat II and Street Fighter Alpha with him and my brother at our house, and thought I’d enjoy Tekken 3 as well. He recommended I play Eddy. I tried it out, fell in love with that game, and have mained Eddy/Christie ever since. Thanks!

A few years later and I’m in college, and we are sadly in the final stages of TILT’s life before it eventually shut down. If you can look at the early 90s seeing arcades be saved by fighting games, I would say in the early 00s arcades were bailed out again by a little game series called Dance Dance Revolution. My friend group and I were addicted to this series. The home console version were fine, but they didn’t compare to the arcade experience. The metal pads, the huge screen, the music pumping, and hundreds of songs instead of the PS2s dozens made the arcade the clear winner. I remember going after multiple hour long swim practices just to drop a few bucks into DDR and sweat all over again. It was fantastic, and an experience I can wholly call my own thanks to TILT.

As I went into college, the mall (along with seemingly every mall everywhere) was all but dead. So many stores had left. TILT had closed down, and in its place a vacant, large room. Randomly an arcade was opened in the storefront right across from TILT, but it wasn’t TILT. Simply called “Arcade”, this place ironically had some decent titles: Hyper Street Fighter II, San Francisco Rush, and some older retro titles adorned the walls. If the games worked, they were great. But sadly this was already past the end. This arcade was the last the mall would see before being shutdown completely. That was back in the late 2000’s, and there hasn’t been anything in that mall since.

TILT was an amazing experience that I know many others did not have the luxury of having. An arcade in your own home town, and one that was obviously owned and run by people passionate about the arcade scene, is something I have taken for granted. I really don’t know what my gaming life would be like without the arcade games of TILT. Would my brothers have enjoyed playing Mortal Kombat if it weren’t for the arcades? Would I have really gotten into DDR if the home console version was the only one I played? Will I ever have won those local Tekken tournaments if I hadn’t been urged to play as Eddy? These are all experiences that have absolutely influenced my outlook on video games as a whole, not just those in the arcade. And for that I am forever grateful to TILT and the people that made those experiences in my youth possible!

That is a very brief retrospective of my arcade experience growing up. As mentioned, there were other locations I would play and enjoy arcade games, but it was TILT that really turned me on to enjoying the arcade scene. What was arcade gaming like for you growing up? Did you have a local place to call your own, to hone your talents, and to try something new? Is it still open today, that’s the real question! I’d love to hear your experiences too!

A World of Games: Monster Eye

Game Hunter’s Journal: What To Look For When Browsing Games