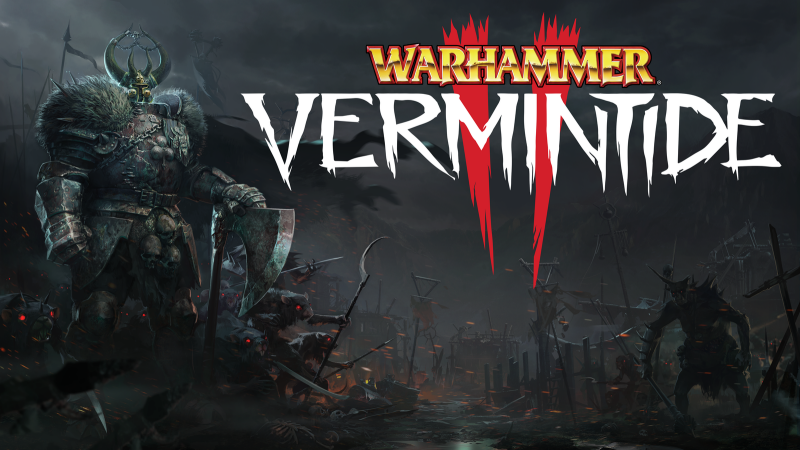 It has been fairly common these past few months for my friend group and I to jump online and play Overwatch. However, we’ve also been enjoying another multiplayer game, albeit on a less daily scale: Vermintide. Since I wrote about the original Vermintide, we’ve actually moved on the the sequel, Vermintide II. While playing the original game the only thing I could find online about either game was how much more enjoyable the sequel was over the original. Having now played both somewhat extensively, I think I can safely agree with the masses the sequel is kind of better than the original.

Both titles are largely the same in terms of core gameplay: you play as one of five different characters in the Warhammer: The End Times universe. Along with your friends you’ll form a team of four heroes to take on endless swarms of evil ratmen (and in the sequel ratmen, zombies, and more!). Using axes, guns, bows, swords, magic, and bombs you’ll blast, chop, and explode your way through stages and objectives en route to a level end point. Gaining experience levels up your character, new loot powers up your abilities, and hidden collectibles in each stage reward your curiousness for exploration. Rinse and repeat.

Without getting into the details, I do feel like Vermintide II is immediately more approachable and playable than Vermintide I. The sequel has more rewards to make it feel like you’re making progress with your character. it also has more enemy types, varied stage environments, and character customization, both cosmetic and game changing. The storyline for both games are highlights, but with more stages in the sequel (and some of the original game’s stages even being in the sequel as DLC), it’s hard not to put a check box in every category for Vermintide II.

Which brings me to the dilemma I find myself in currently. We’ve completed the game on the easiest difficulty. We’ve played through every act, all stages, and are starting up some of the DLC. But things are getting easy. We’re understanding of the nuances of the game so far. We know how to deal with hordes, Rat Ogres, bosses, and where to look to find tomes and grimoires.

So what else is there to do?

Personally I want to try some of the higher difficulties. Missions are somewhat easy, to be honest, with most not presenting any challenges at all. But would fighting a few more special enemies and having them deal more damage really impact my experience? The stage story setpieces are all spoiled now, having played through them, so seeing the Skittergate once more won’t be as impactful as the first time. If the game is devolving into a grindfest, is it really going to be worth it?

I discovered I had a similar problem with Left 4 Dead when it released. I found myself enjoying the game immensely the first few playthroughs, then afterword not quite enjoying it as much. Still a fun game to play with friends, but the luster had worn out. My drive to keep playing L4D and L4D2 was mainly to try to get some achievements. Granted there are achievements here in Vermintide II as well, but I’m wondering if we’ll stick with it.

The loot grind can be exciting, to be fair. A few levels back I did find an incredibly fun flamethrower to use with my Dwarf, and that’s sparked some increased interest in me to keep moving forward. And finding an axe I really liked was pretty awesome too. So perhaps maximizing my character really is where the game is heading, and it might not be that bad.

If I could have a perfect solution here it would be more story content and stages. I think one thing Vermintide (sequel and original) does better than Left 4 Dead is variety in stage objectives. Surviving hordes until the end is great, but so is hopping around a half-destroyed tower to detach a massive bell in order to escape. And running through portals to other parts of the world is exciting. Seeing multiple special Skaven show up at once is exhilarating. Will repeat missions on higher difficulties bring that excitement, or will it be lost on the repetitiveness of it all?

I suppose time will tell. For now, though, I am still looking forward to playing Vermintide with our friend group each week. I’m still partial to my Dwarf, Bardin Goreksson. I want to see when the DLC goes on sale so I can play even more content. And maybe, just maybe, I’ll enjoy finding new weapons to do it all over agian.

What Other Games Should Get the “99” Treatment?