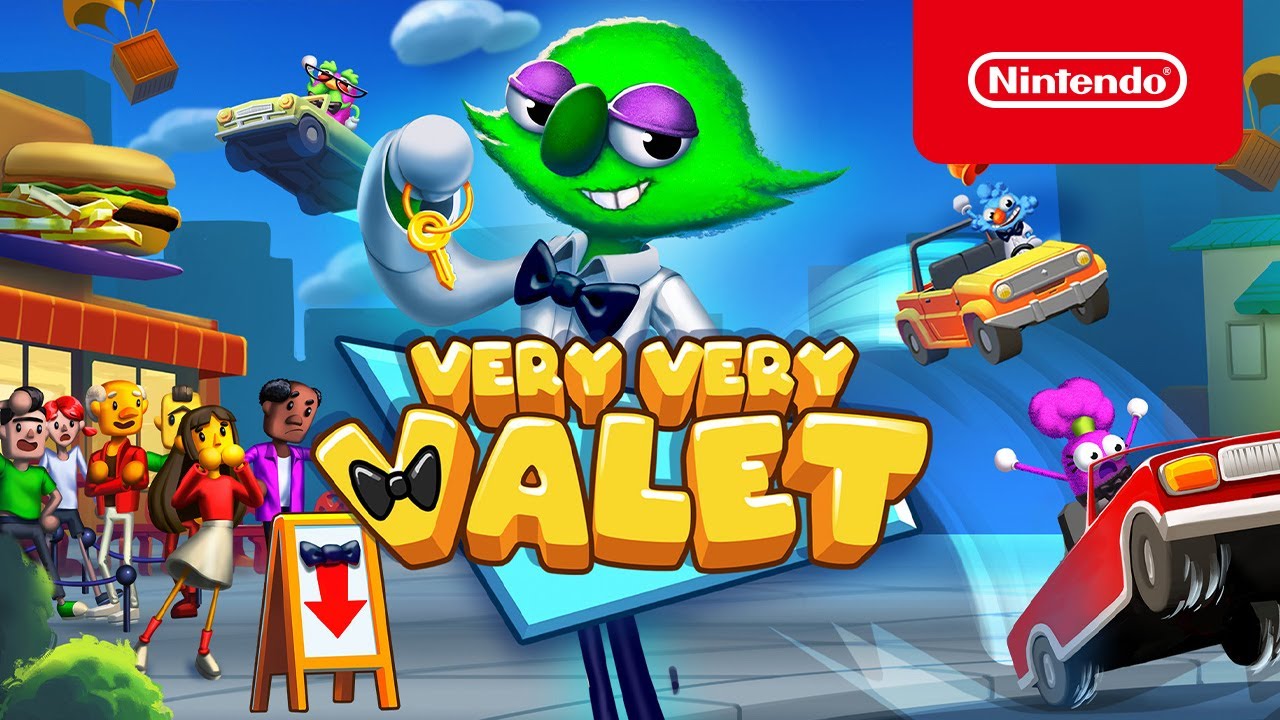 There’s something magical about getting a group of friends together, sitting on the couch around the TV, grabbing your controllers, and playing a game together. It is something which I think has been lost as games go further and further toward online gameplay over traditional multiplayer. The biggest piece of evidence for this is couch co-op becoming a selling point for a game, because *insert old man voice* back in my day games were couch co-op all the time.

With this new mentality in mind on how we consume video games, the notion of playing together with friends around the TV is relegated to the sidelines. Thankfully the Nintendo Switch came along to throw a wrench in modern game design by allowing every console to essentially come with couch co-op multiplayer built right in with their Joy Con controllers. So now every Switch owner has at least two controllers to play games. What is a game developer to do?

For starters they could look at Toyful Games’ Very Very Valet, a Switch exclusive that released earlier this year.

Very Very Valet has you and three friends taking on the arduous task of parking cars for patrons. Rather than parking them nicely and, you know, abiding traffic laws, you can drive them recklessly and crash into just about anything (including each other). So long as you get the car parked and returned in time, you’re golden. Mix in some fun mechanics like ramps, multiple floors, car washes, and teleporters, and the insanity flows free. It’s simple fun and it’s simply fun to play.

A large part in why Very Very Valet works is because it leans into the absurdity. It’s not trying to be anything more than it is supposed to be: a wacky multiplayer game where try to park cars. When the entire idea behind the game centers around playing with friends, you can make something unique, engaging, and rewarding for the players. A good example of this comes in the recap at the end of each round. A short 3 second clip for each player highlighting their silliest moments, with closeups to their faces reacting to the chaos. It’s funny. And it’s a great way to share a laugh with your friends.

Despite being a game designed to be played in local multiplayer, Very Very Valet still borrows heavily from modern video games. Stages are broken up into short 4 minute rounds, with a 3-star rating encouraging you to ace each level before moving to the next. Scattered throughout the normal valet stages are rounds that take advantage of the game’s physics system to do something completely different. The change of pace again keeps me wanting more and makes me keep playing. And though this is a general theme in my opinion, I think leaning into the cartoony-ness with the art style and animations was the right move for the type of game. It all came together to make a game that was incredibly enjoyable to play with my friends for an evening.

And sadly that is my biggest complaint with this game: it was over in just one evening. Aside from a few stray stars we’re missing, we played through everything the game had to offer. There are (currently) no new levels to unlock or play. There are no new modes outside of the main game mode. There’s also really no replay value once you complete each stage. And that’s a real shame. I would have loved to see a few dozen more stages to work through. And I would also appreciate more stages incorporating things other than valet parking. The bowling and street cleaning minigames were wonderful, but there were not enough of them. And I saw huge potential in the final minigame forcing you to drive on top of each other to create platforms in order to reach your goal. I could see where the developers were going, and I only wish they had gone farther. Hopefully, though, the developers are working on new updates. I would jump right back in when I see there’s more content to be enjoyed.

I think a game like Very Very Valet is an easy recommendation to a very very specific group of gamers. If you grew up playing multiplayer games on the SNES or Sega Genesis, you’ll find a lot of fun to be had here with friends. However, if you rarely played games to just have fun and laugh with your friends, you probably won’t appreciate the game’s simple premise and gameplay, or the game’s admittedly easy difficulty. I am happy to be in the latter group, and thoroughly enjoyed my short time with the game.

Here’s hoping more developers take couch co-op multiplayer seriously, and create games that are fun to be played with friends. At the very least, here’s hoping we can get more games where I can drive through parking lots, eject out of my car, land directly in another patron’s car, and kick them out of their vehicle before they even fully appear on the screen.