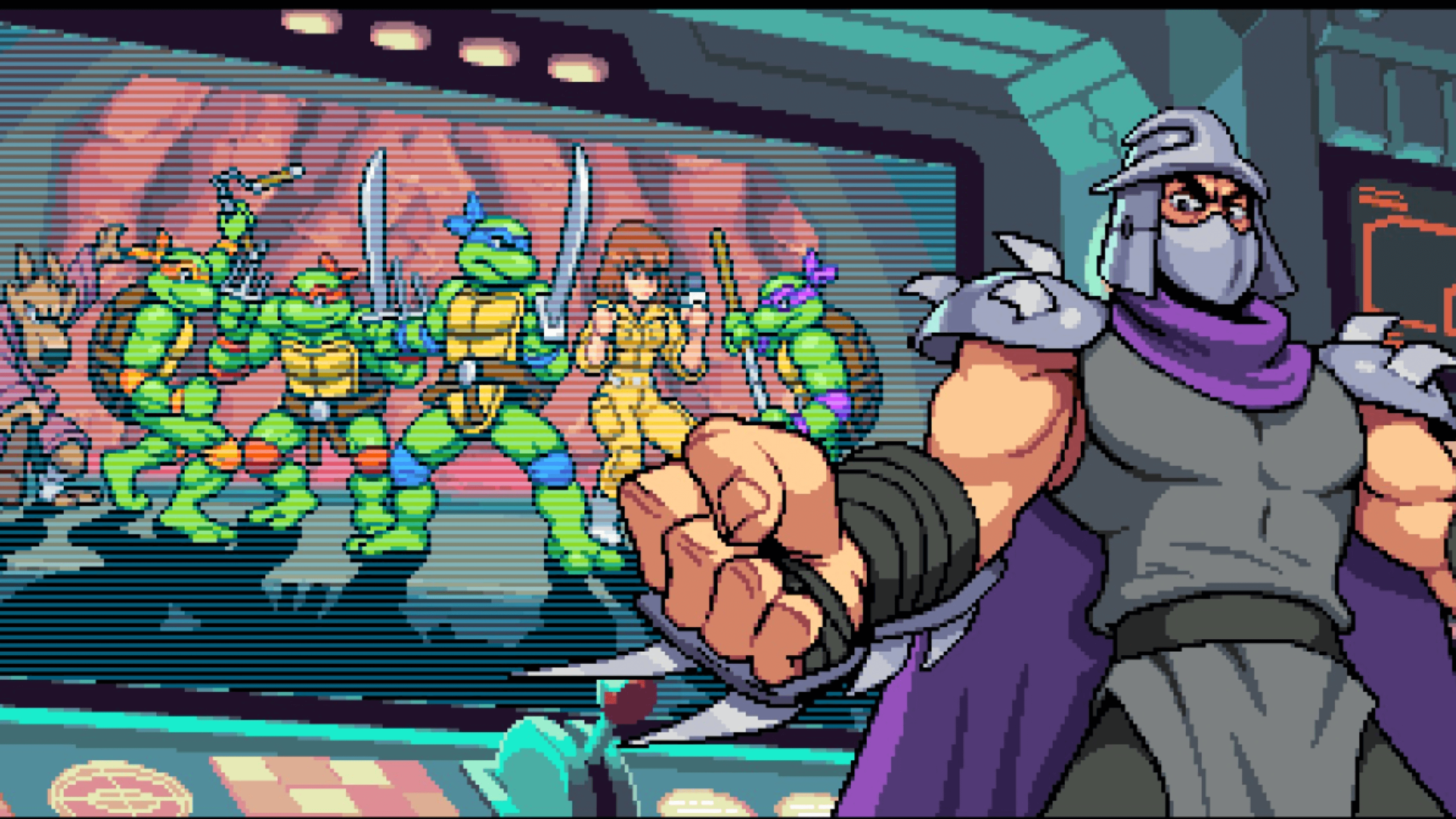 After the incredible Teenage Mutant Ninja Turtles: Shredder’s Revenge came and brought back all kinds of nostalgic feels, I was thinking about yesteryear. Thinking about the games I’d move on to from the Turtles cabinet once I inevitably lost to some cheap boss. Reminiscing about spending hard earned quarters on a game of pinball. Or on the latest fighting game next to the venerable Street Fighters and Mortal Kombats. Basically, I was thinking about my childhood spent in arcades and dreaming up ways to play more video games.

Dotemu, publisher of the aforementioned Shredder’s Revenge (as well as developers of the excellent Streets of Rage 4), have made a name for themselves by bringing back old franchises into the modern era. Games that lived in the arcades can have a new life at home, with new stories, new visuals, new controls… new everything! And with other developers taking chances by bringing back something familiar, it seems now is the best time to look back at the games of the past 80s and 90s to find the one’s that deserve a shot at stardom with a brand new release.

Captain America And the Avengers

This one is an absolute no brainer to me. Dotemu has already expressed their expertise in developing old beat’em ups for a new generation. And Marvel’s Avengers have arguably never been more popular or relevant. So why not throw them back into the fray with a good ol’ beat’em up with all the flairs of today’s gaming landscape? Iron Man, Cap, Spider-Man, Ant Man, Black Widow, Captain Marvel, Wasp, and so many more can round out the cast. Heck, why not go nuts and make this a game that has dozens of playable characters! Enemies can be pulled from literally any Marvel property, so we can see the likes of Dr. Doom, Red Skull, Thanos, Kang, and even, I don’t know, Madame Web show up as villains.

Also, the visuals should retain the cartoony, bright visuals of Shredder’s Revenge and Streets of Rage 4. It will hearken back to the arcade days of the early 90s, where the nostalgia for this game is deeply rooted.

Another beat’em up that deserves more of the limelight is Capcom’s oft-forgotten Cadillacs and Dinosaurs. Answering the question “What if Final Fight, but the world also had dinosaurs in it?”, the game is actually based off a comic book, and that is likely where a new entry would go. Seeing as I’m sure the car manufacturer wouldn’t want the branding of Cadillac these days to be associated with dinosaurs and death… A new entry can capitalize on the camp, adding more dinosaurs, more ridiculous situations, more weapons, and the list goes on. Even just a nice port of the arcade game would be cool, as there are no home console ports (at least not to my knowledge), and therefore no way to play this one unless you find A) and arcade, and B) a cabinet of the game.

Arcade 1-Up has been releasing at home arcade versions of some of your favorite games, including a cabinet with multiple versions of Midway’s classic NBA Jam. Despite the availability, those games are still using old rosters, old code, and dated visuals to play a great game. Imagine walking into an arcade (or downloading online) a brand new NBA Jam, with the full license of the NBA players, improved visuals, the same outlandish dunks, and of course the iconic announcer! The 2010 remake did a lot of things right, but let’s instead get an arcade game you can play with friends while at Dave & Buster’s or a similar location. Better yet, let’s integrate your stats and progress between the arcade game and the home console game. It’s a targeted audience for sure, but it can be a really fun time.

OK, so admittedly this is a bit of a stretch, but I absolutely loved the absurdity of an on-rails shooter game about Aerosmith. In the 90s, I really enjoyed their music, thanks in part to my oldest brother listening to them quite a lot. The game wasn’t half-bad, but was definitely an arcade quarter muncher, with a lot of cheap shots and kills designed to get you to drop more quarters. A new version could take the simple approach and just license the band’s music to play in the background, with some vague ties to the original game’s antagonist group. But what I’d rather see is Steven Tyler and gang reprise their role, digitize themselves into the new game, maybe even record some exclusive music, and tack all that on to an even more bonkers plot. Remember, music is the weapon!

The Typing of the Dead

So this one did get some remakes, ports, and sequels, but none of them released in the arcades. Only the original game saw an arcade release, complete with up to two keyboard controllers sticking out like a sore thumb in the arcades. Essentially a conversion of the light gun shooter The House of the Dead II, The Typing of the Dead replaced guns with keyboards to eliminate a zombie threat. And it was crazy fun! I also liked how the game is literally just a re-release of House of the Dead II, but with a new control scheme: no one mentions their carrying keyboards in the game, and no one brings up the craziness of it all, and that is exactly what I would want to see in the new release. Heck, they can just re-release the Windows game Typing of the Dead: Overkill (itself just a typing-based version of House of the Dead: Overkill) in arcades and I’d be happy!

You know this one, right? it’s the very basic bowling game, where your controller is a trackball that you flick to send your virtual bowling ball down the lane. I bet you played this 1988 arcade game at some point, and greatly enjoyed it. Seeing as it used a trackball, and there were not very many trackball controllers released on home consoles, the true experience for this one lived in the arcade. Well, how about bringing this one back? The new cab can have two balls, include some haptic feedback, allow for some character and ball customization, and also offer the wackiness arcade sports game need. I’m thinking something like non-standard lanes, pins that move around, environmental hazards, anything to make the game zany and fun to get some high score and tickets! Sure, a home console port would be cool, but let’s make this one a unique arcade experience.

Seeing the success of fellow fighting franchises like Street Fighter and Killer Instinct, the Atari game Primal Rage is poised for a return. Utilizing shock factor and being a very different experience from those other games, the dinosaur fighting game can return with new characters, new locales, and new violence. I was a fan of the game’s claymation style visuals, and would love to see them return too. Why not up the ante and do it all by hand? Make it a truly unique experience. Also, getting veteran fighting game developers Capcom behind the project would be incredible too! It’s not that crazy: I don’t think Atari is around making games anymore, and the IP could be scooped up by someone new.

We’ve already seen the impossible, and the “Final” game R-Type Final actually saw a sequel in 2021 in the form of the aptly named R-Type Final 2. So why not reach for the stars and hope for another arcade version of the shooter? The game can include multiple options and powerups, and increasingly difficult bullet-hell gameplay. The arcade R-Type would cater toward the highly skilled arcade gamers, and hopes to draw crowds to the cabinet. Special cabs include a sit-down style version, immersing you more into the space shooter gameplay. More than likely, no one would play this game, as the concept of the “High-Score” arcade game is dead… but I can dream.

Remembering Costume Quest, the Best RPG About Fighting Monsters and Trick or Treating