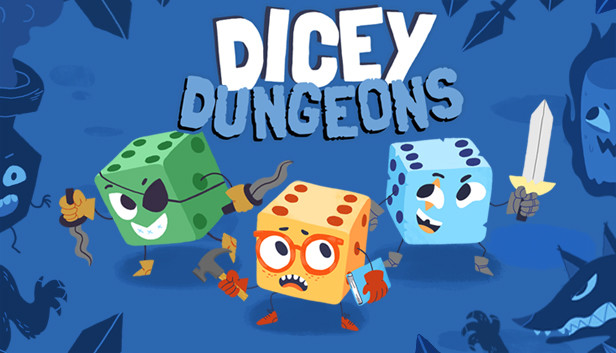 I think I can safely say the Rogue-lite genre has become one of my new favorites. With amazing games like Rogue Legacy and Dead Cells leading the way, and incredible genre bending games like Slay the Spire sapping away all my free time, it’s a definite welcome addition. So you can imagine my excitement when perusing the Switch’s eShop I came across Dicey Dungeons. A Rogue-lite card based game with charmingly simple visuals and a luck-of-the-roll dice mechanic? Count me in!

In execution Dicey Dungeons works fine. You play as one of six different characters, each represented by a unique six-sided die. The Warrior for example starts with some typical attack cards like swords, while the Robot utilizes a risk/reward system for actions. There’s enough variety between the six different roles to make each character feel like a completely different experience, even though the core gameplay is the same.

Speaking of which, the core gameplay of Dicey Dungeons has you rolling dice (go figure!) and using the results of your rolls to determine which actions you can take via the cards in your deck/hand. Some cards attack the enemy, some heal you, some inflict status ailments, some alter your opponents dice, some allow you to roll extra dice, and so on. There are limits to your actions though: certain cards may only be used if you have an odd number die, while others can only be used if you have four or lower. The restriction on certain cards mixed with the pure RNG of your rolls each turn make every trek through the dungeon luck and skill based at the same time.

Despite the solid setup, I think the game falls short on fun factor. And this is largely my own personal bias. I cannot help but compare the game to others like Slay The Spire, and that games does what Dicey Dungeons is attempting to do, but a whole lot better. A major factor contributing this this feeling is variety. Sure, Dicey Dungeon has character variety between the different dice you play as, but the attacks and abilities are identical across them all. Take Slay the Spire again and you’ll see that games four classes having distinct play styles and unique cards/attacks. It makes playing them seem familiar (you know the enemies and their patterns) but special enough to utilize different strategies to win. In Dicey Dungeons there’s a lot of luck and not much else between the classes.

Another personal preference I did not find in Dicey Dungeons was any sort of player progression system. This is a rougelike game for sure, but I prefer the more approachable “Rogue-Lite” genre that gives you some avatar strength and perks for multiple successful playthroughs. Rogue Legacy was a pioneer in this one for me, and I was hoping to see something like that here. Hell, there’s not even unlockable cards or anything from beating the game multiple times and in multiple scenarios. Unless you really like the challenge the game presents, what you see from the very first hour of the game is what you’re going to be playing through dozens of hours later.

I wasn’t expecting a huge story or anything here, so no problem there when the game presented none. There’s a game show approach to it all, but it absolutely takes a back seat to the gameplay itself. A narrative weaved into a silly premise like dice rolling dice to escape a dungeon would have been a great chance to flex some creativity, but we’re left with nothing, aside from the funny quip here and there.

Dicey Dungeons is by no means a bad game. It has a certain charm to it that you can appreciate, especially so if you are a fan of the genre. But overall the game feels like there are a handful of small things keeping it from being truly great. A lack of a progression system, unlockable content, and gameplay variety hold this one back from really standing out in a genre slowly filling up with gems.

Cat Quest is the Purrrfect casual RPG for Cat Lovers