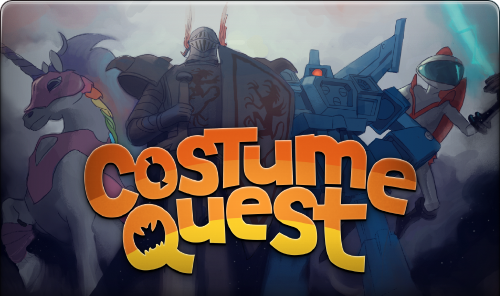 Double Fine Productions has no shortage of quality games under its name. Heavy hitters like Brutal Legend, Broken Age, and Psychonauts have left an impact on the gaming landscape. The development house lead by Tim Schafer has been around for awhile, and shows no sign of slowing down.

But I wanted to slow down today to look at one of Double Fine’s best little games you may not have ever played. A game that has a direct sequel, a comic book spinoff, and a full blown cartoon series. A game that just turned nine years old. The game is Costume Quest.

Released for the Xbox 360, PlayStation 3, and PC back in October 2010, Costume Quest is a traditional RPG set in a realistic-yet-decidedly Double Fine world. You control a set of twins that are new to the town, and head out to Trick or Treat to make some new friends. Upon discovering what you think is a kid in a monster costume is an ACTUAL monster, your twin gets kidnapped! Now you’re teaming up with fellow Trick or Treaters, battling real life monsters, and trying to save your sibling!

Costume Quest was immediately adorable in the way it handles childhood fantasies. In order to battle the baddies, you will utilize the actual costumes you are wearing. Dressed up as a robot? In battle, you’ll turn in to giant mech that can devastate your opponents. Even the cute french fries costume can become a formidable ally in battle. Its charming to see how a child’s imagination can create these fantastic worlds to explore. Sure, in this case there’s actual danger, but in the eyes of a kid, this could be how they really perceive Halloween! It’s a great juxtaposition of two opposite ideas.

A good chunk of the game will be battles. Thankfully battles are executed well enough they won’t feel stale toward the end of the game. In a sort of Super Mario RPG move, battles have simple button inputs you can perform to deal more damage. Couple that with the ability to change your costumes between battles to gain new moves and abilities, there’s a good sense of interaction throughout. Enemy encounters were punctuated in each area with a unique boss battle, which was a decent test of your skills (if not just a bit frustrating).

Not a very long game, the entire adventure can be completed in just a few hours. But the journey is more of the emphasis than play time. As you explore the town and jump through hoops to get back your brother or sister, you’ll interact with other people who give witty remarks about the holiday. You can also play games like bobbing for apples. And you can of course get all kinds of candy, which in this case acts as a form of currency (what else would kids deal in?). This was definitely a game where I found myself exploring just to enjoy the scenery, and to see what was around the next corner, as opposed to directly moving the story forward.

The Double Fine games all have a distinct art style. Psychonauts has that surreal yet kind of creepy look. Broken Age is more realistic in its design, but equally vibrant and fantastic. Costume Quest falls in line with the more realistic titles, featuring a bright art style mixed with some spooky aesthetics. I kind of got some Tim Burton’s Nightmare before Christmas vibes from the game, as there are trees and houses that look should be non-threatening, but look a bit ominous given the circumstances. It’s a memorable art style, and one that extended into the battles as well. Visuals aren’t everything, but when the game gives you something fun to look at, it doesn’t hurt.

Looking back at Costume Quest I have good memories of picking up the game and enjoying it so much that I completed it in one sitting. Granted, the game isn’t long, but still, when a brand new game can capture you in such a way, and so suddenly, it leaves a nice impression. By no means is Costume Quest flawless, but when the minor hiccups are outweighed by the overall solid experience, it makes for a good video game.

As we are approaching Halloween, and everyone seems to be talking about scary games to play, I wanted to look at something different. If you haven’t checked out Costume Quest, it’s easier to do now than ever: the game is available on Steam, Android, and iOS devices. There’s also a sequel you can try too, but I have yet to play that one. If it’s anything like the original, it’ll be a great adventure perfect for this time of year.

Have you played Double Fine’s Costume Quest yet? What was your favorite costume? Let me know. And Happy Halloween!

Vermintide II Starts Great, Ends Well, but Will the Endgame Content Be Worth Replaying?