Visual novels are surging lately in the video game world thanks in part to games like Virtue’s Last Reward, Danganronpa,  and the more recent Doki Doki Literature Club. These “games” are more interactive story than actual game, but that’s exactly what you’d expect from the genre’s name A branch of the visual novel genre are dating sims: games where your end goal is to find love with one of the characters in the story. Oftentimes these games have a unifying theme, such as Dream Daddy letting you make relationships with eligible men with children, while the more bizarre Hatoful Boyfriend has you befriending different types of… birds? In this strange sub-category of the sub-category of visual novel/dating sims exists Wingman DX. What is Wingman DX you ask?

It’s a dating sim where you court fried chicken wings.

Before you call fowl, let me tell you this game absolutely exists, I have played through it several times, watched the creator stream the game! I will include download links at the end of this article.

Wingman DX takes many queues from other visual novels and dating sims and uses them as you would expect. You play as a human who, somehow, ends up at a school for up and coming wings to discover their soul-mouth and harness the most delicious flavors a wing can have. There are genre troupes like the hard-to-get and misunderstood older student, your long time friend (somehow), as well as exchange students who speak a completely different language. Through a variety of dialogue options you can gain favor or lose credibility with certain wings, all the while leading up to the end-game dance, where you can take a wing of your choosing with you to the party. It’s silly, it’s funny, and it’s surprisingly well done! 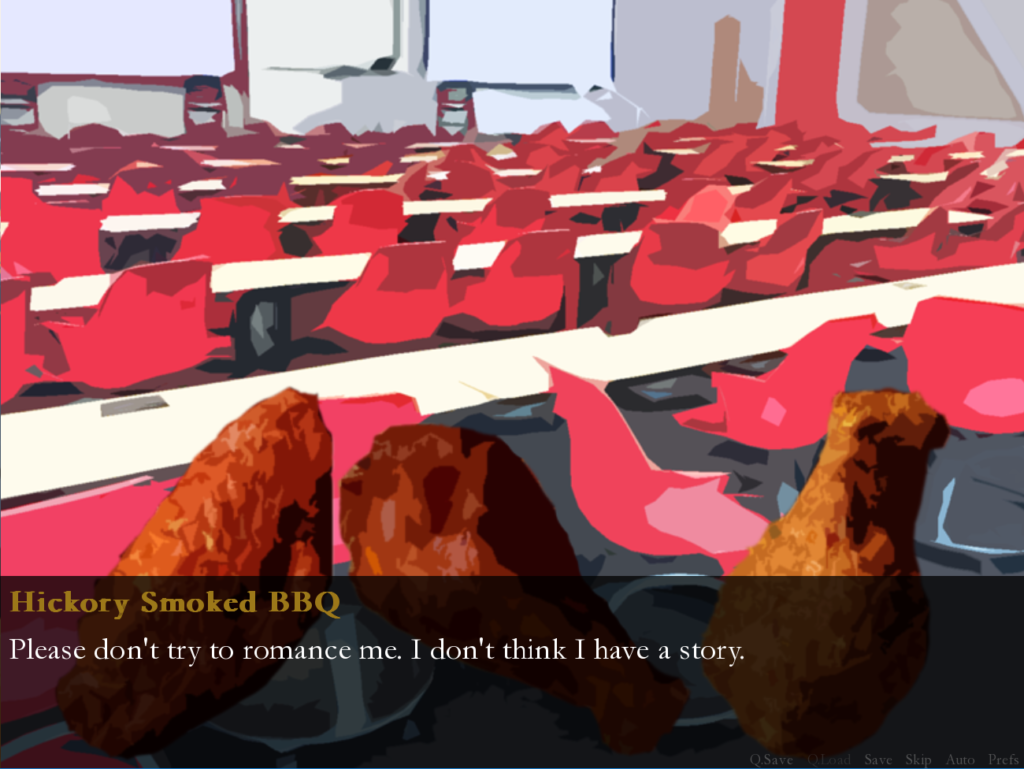 As you progress through the story, the atmosphere builds appropriately. I found myself kind of in disbelief at first, thinking how weird the concept was. Not only am I playing a chicken wing dating simulator, but the characters in the story make it a point to let me know I’m a human in a school for chicken wings! Wingman DX is self-aware, and it benefits because of it. Once I got to the end of my first playthrough (each story only takes about an hour to complete, and there are over 14 endings!) I actually found myself invested in the world. I felt like I should go to the courtyard to hang out with some different wings instead of staying in my dorm room and talking with my roomates/wingmates.

Dating sims and visuals novels all hinge on one thing: writing. Thankfully, Wingman DX is well written and full of clever puns, quirky dialogue, and even some spoken voice lines! After some time with the game, the wing-theme which runs through the entire story creates a believable (somehow!) world. The wings themselves are the highlight here. Each wing has their own personality. The aforementioned badboy Atomic plays hard to get, while the shy and bashful Lemom Pepper acts as a wonderful foil. My personal favorites are the bro’ish Honey Pineapple, and the sexy and delicious Garlic Parmesan. Regardless of our favorite, it is well worth it to play through the game multiple times to see how each character interacts with the player (who can only be called Balyssa, for some reason?). Wingman DX does a good job keeping the pace, allowing you to play for just the right amount of time before it overstays its welcome. 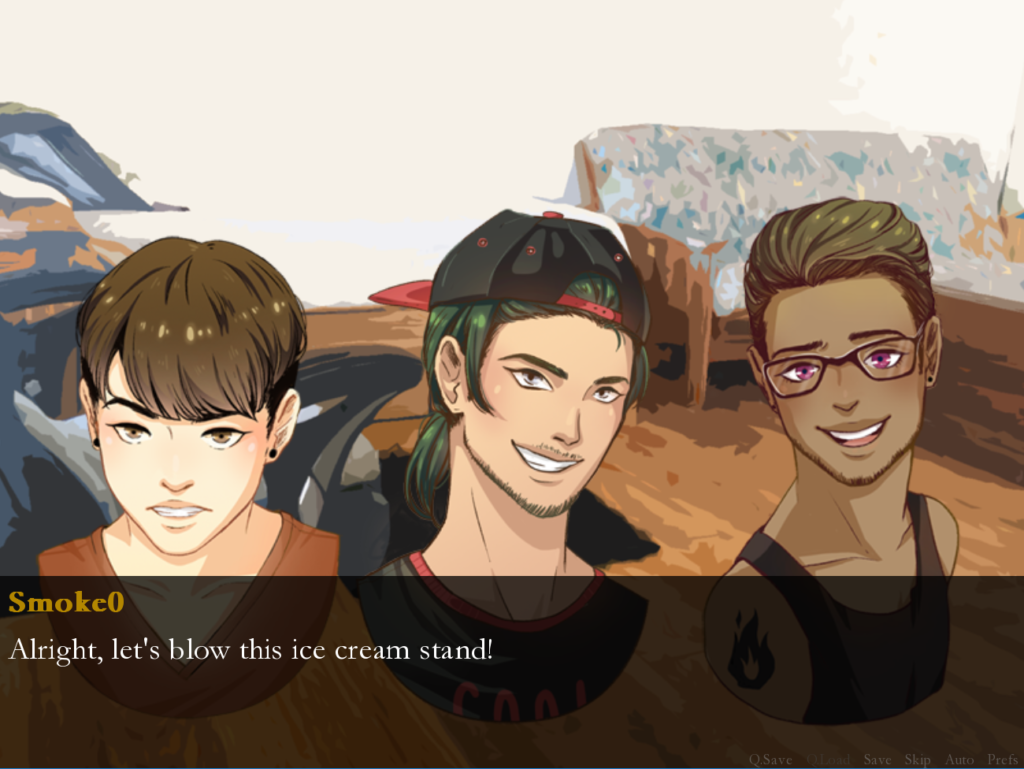 You’d think a game about dating chicken wings wouldn’t feature beautiful art, but hot damn it does! There is a “classic” mode where you can play through the game with stylized pictures of fried chicken representing each character, but there is also a mode where the wing pictures are replaced with actual human representation of said wings. These human pictures are varied and well made, lending themselves perfectly to the headcanon you might create for these characters otherwise. The visuals are accompanied by a well written soundtrack featuring upbeat tunes while outside of class, as well as more intense music when things get heated. It’s a great, whole package for a game that you wouldn’t expect to offer all that much!

It is obvious Wingman DX is a very special game. The credits tell us the entire thing is created by one person, with a couple others providing music, art, and voice acting. The passion project is targeted for a very specific audience, but it is still far reaching enough to entertain anyone who likes dating sims. I think there are a small niche of players who enjoy the oddball games like this, and let’s face it, will there every be another video game where you can woo a Teriyaki chicken wing?

Again, this is a real game. You can head over here to download the game, and below are the social media accounts for the game.

*Disclaimer: This game was created by a personal friend, and I was more than happy to play, review, and help in the creative process! Enjoy Wingman DX!*

Review: Tales From the Borderlands Episode 1