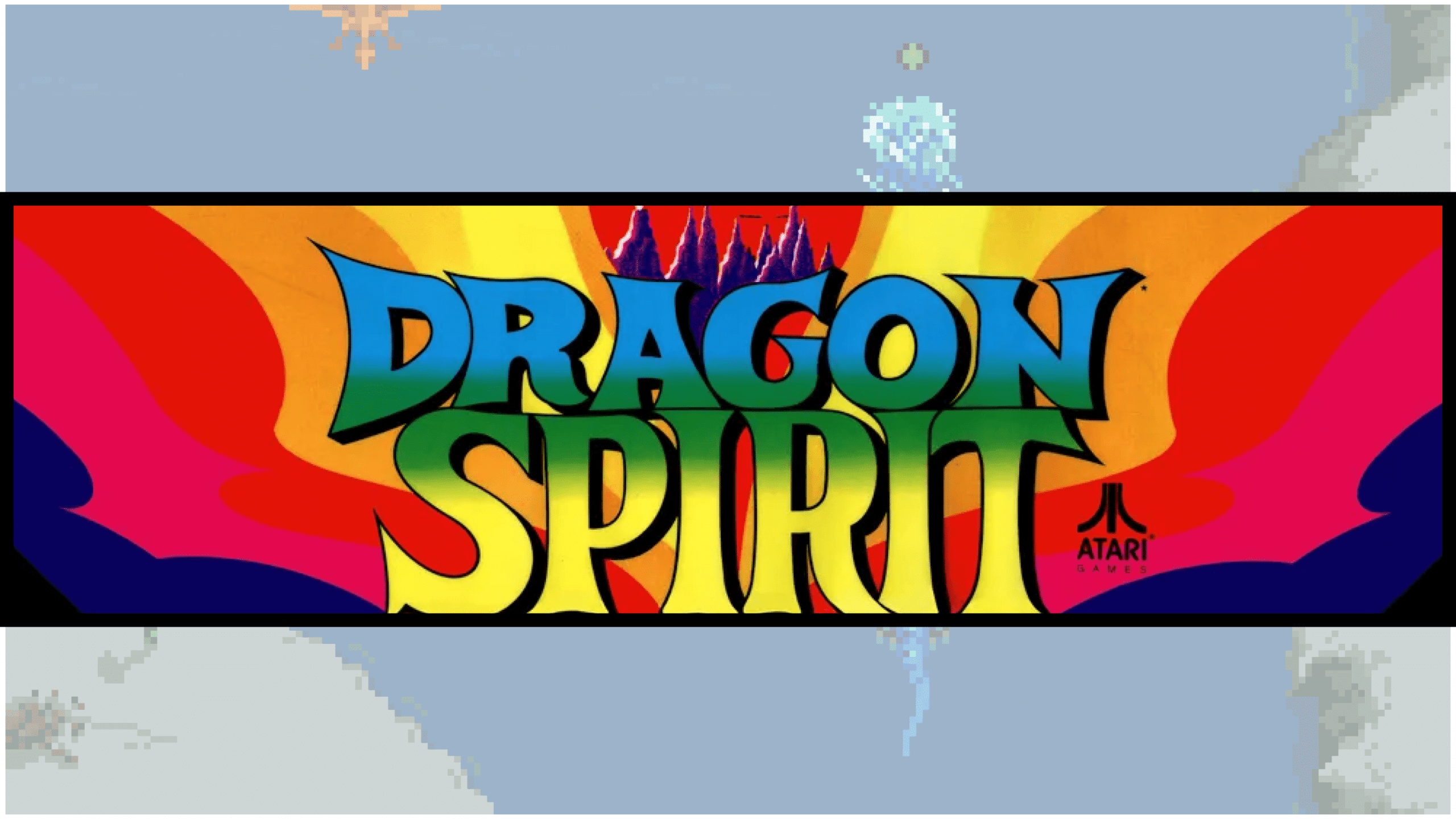 Released in 1987, Namco’s vertical scrolling shooter Dragon Spirit plays a lot like other vertical scrolling shooters: you can only take two hits before dying, you shoot ahead with your base attack, and can bombard the ground with an alternative attack to take about a variety of enemies, and collecting power-ups from downed foes grants additional firepower and extra lives. Basic stuff at this point, but what you’d expect from games of the era.

Except unlike games like 1942 or Xevious, this one is all medieval with its Dragons and mythological feel too it!

Aesthetics are one of the biggest draws Dragon Spirit has over other shooters in the arcade, even down to the cabinet. Bright purples and yellows accent a color scheme which sticks out compared to the drab blacks and greys of other space-themed shooters. If the arcade you’re playing in is dimly lit, as arcades should be if I’m being honest, you also get this cool glow effect from the screen overlay, which doesn’t fully come through in these photos.

Gameplay-wise Dragon Spirt is tough, like you’d expect from other shooters at the time. Memorizing enemy patterns and dodging bullets is the name of the game here. If you’re playing in 2023 or beyond, perhaps your arcade is set to free play. In which case, I’d highly recommend playing through this entire adventure, which lasts under 30’ish minutes, and has you eventually taking on an entire castle full of bad guys. It’s kind of funny to see this sometimes three headed dragon reigning down fire on the entire enemy frontline and base. If I were part of that army, I’d dip as my fellow fighters were burnt to a crisp, but that’s just me. If you like other shooters in the genre, you’ll like Dragon Spirit.

The arcade cabinet is pretty sweet too. We’ve already talked about the colors, but the artwork is also noteworthy. You are controlling a dragon after all, so a fitting depiction of your flying friend is on the controller overlay. I’d also like to point out how there’s a sort of how-to section instructing the players what to do in the game. This isn’t even a unique feature to Dragon Spirit, it’s on a lot of games of this era. Relics of times passed. Also, in case you forget what you’re fighting for, there’s a reminder about saving the princess by transforming into a dragon and taking her back. Awesome!

Dragon Spirit saw a port on the NES in the form of Dragon Spirit: The New Legend, and a full sequel called Dragon Saber released in 1990. Worth noting, the arcade original and the sequel Dragon Saber never saw US releases until recently with the introduction of the Arcade Archives series of digital releases on current platforms. I don’t think I’ll pay to play these games online and instead look for them in the arcade, but it is neat to finally see these games escape their arcade confines.

A World of Games: Alien 3: The Gun

A World of Games: Cosmo Gang